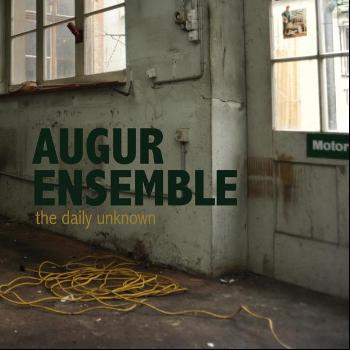 Loosely speaking, this is chamber jazz.  The Daily Unknown, the debut album by the Augur Ensemble, perfects the delicate balance between composition and improvisation, between jazz and classical… of exquisitely detailed structures and revelatory spontaneous creation.

There is a stark beauty to this music.  The presence of brass and strings together brings a statuesque grace to the proceedings, bordering on the formal.  Piano adds a haunting element to the affair, though also a comforting calm, in its way.  Drums and bass do not typically behave as a typical jazz rhythm section, but when they lock into one another’s flight pattern, they launch songs into a thrilling orbit.

This is music with a distant warmth.  It captures the listener’s attention, like the brightest stars on the darkest nights.

The two most notable successes in this particular formula of chamber jazz are Wayne Horvitz (and his various ensembles, especially that of his Gravitas Quartet) and the Peggy Lee Band, a cellist who switches between avant-garde dissonance and pop-jazz melodic beauty.  Augur Ensemble, without a doubt, have to considered in their league when it comes to successful ventures into the chamber jazz-classical mix.

The album opens with “The Bell.”  Piano and strings are like swirling mist… ethereal despite its apparent density, airborne yet just inches from the ground.

“Egon” is a steady rainfall.  Rhythms pelt the melody so that its revealed only in bits and pieces.  It is not unlike “Herd,” with Mueller’s piano stamping the rhythm into place as woodwinds and strings soar just over the rise.

“Strange Neighbour” lets the melody through loud and clear.  Dorsdal’s trumpet brings it to the show, but the cello and violin of Heggendorn and Egecioglu take it for a spin as well, with von Grünigen’s bass providing some essential balance in the lower registers.

“Treppenhaus” has a meandering gait.  Piano and strings sway like trees in a stormy wind.  Leaves stir just a bit from the ground.

“Korridor” has a contortionist’s grace… strange curvatures and sudden angles delivered in a fluid motion.  This leads into the transformative “Gold and Misery,” a song that emerges with the slow all-encompassing presence of a sunrise spreading warmth and light over the land.  It marks the ensemble’s song pattern of unconventional, deconstructed beauty shifting into sections of astoundingly heartwarming coalescence.

“Lirium” begins as a bubbling cauldron of swirling notes, but then gradually reveals itself as chipper folk song, delivered at a brisk pace and threatening to lose form and disperse with the next dissonant note.  Yet, it holds, as it grows into a torrent of dissonant notes.

“Trouvaille” is a simple ballad with a seaside ease and moonlight warmth.  Dorsdal’s trumpet and Mueller’s piano set the course, and direct the ship.  The sonic analogy continues with “Vesper,” a surging tide, battering the shore, yet despite its fearsome presence, there’s an unmistakable beauty to its motion and appearance.

“Construction” builds up to a shimmering beauty… disparate unconnected parts transforming into a single entity, fitting together like clockwork.

The album ends with “Nödbroms.”  A textured array of percussion work by Hegg-Lunde blankets the the disconnected sighs and yawns of strings and trumpet, the dotted landscape of piano.

A beautiful end to a beautiful album.  Easily one of the best things I’ve heard, so far, in 2013.

Released on the Bottom Records and Eclipse Music labels.

Geographically, the members hail from Switzerland, Norway, and Sweden.

Other Things You Should Know:

I referenced two other ensembles that create this type of music.  You should acquaint yourself with both.  It’s outstanding music.  The first is Wayne Horvitz, which you can a review of HERE.  The other is the Peggy Lee Band, whose Invitation was one of my top ten albums of 2012… review HERE.