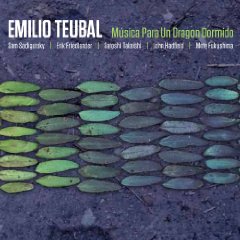 Música Para un Dragon Dormido, the new release by Emilio Teubal is an album of boundless energy and dynamic rhythmic textures.  And yet, it’s the transcendent melodic warmth he brings to the percussive experience that marks this recording as something very special.  Reminiscent of a similar approach taken by fellow pianist Don Pullen during his later years with the African-Brazilian Connection, Teubal endows each song with a supreme loveliness that stands up to the album’s powerful rhythmic elements.

The result is a thrilling album that sounds so damn Big… a preeminent euphoria even when the musicians express themselves in subtle measured tones.

Opening track “Un Simple Objeto” is a series of surging tides, an intermittent pulse that beats out increasing steps upward until, ultimately, launching itself out into space with long slow notes and drafting upon rhythmic currents.  It encapsulates the bigness of sound mentioned before, that such depth and detail could come from just this sextet.

“The Constant Reinventor” begins pensively with piano, the quiet drone of clarinet a match for its expressions of melancholia.  Eventually the chatter grows into something more affable, conjured up by the combo of Takeishi’s chippy percussion and the gurgle-blips of Fukushima’s bass.  But as is so typical of this album, the tide returns to its original state… piano grows pensive once again, this time bolstered by Friedlander’s long resonant cello notes.

“El Tema de Ludmila” begins up-tempo, but with a casual ease.  Sadigursky presents the melody repeatedly, builds up from it while percussion shifts beneath its feet.  Even when sax steps aside for Teubal’s piano section, there remains the sense of piano (and sax) surfing atop the churning waves of percussion.  The easily segmented textures working in cooperation results in a sound larger than its individual parts would normally indicate.  It’s a characteristic of this album that holds throughout.  It also makes this recording something special.

Fourth and fifth track “El Acrobata” and “Un Dragon Dormido” might well be considered the same composition.  It begins with silence, the merest peep from strings, a bit of percussion ideal for haunting, and keys ambling forlornly through space.  Time seems to stand still when cello strikes out on its own and takes center stage.  Suddenly, the music swells, cymbals crashing, sax crying out, keys humming resonantly, intensity rising.  And then, like so often on this recording, the rising intensity diffuses, and the most delicate expressions on sax and cello create a moment of great impact… bringing about a sea change of demeanor, from increasing power to restrained beauty… and the rest of the group falls into place.  Even near the song’s conclusion, when the intensity makes another go at achieving a higher plateau, the seeds planted by Friedlander and Sadigursky earlier on still resonate with a sublime majesty.

“La Espera” begins with a waltz elegance and a lullaby warmth.  Teubal stretches out for a nice section on piano, exceeded only, perhaps, by Fukushima’s lyrical display on bass.  The breakdown of this tune leads perfectly into the theme of subsequent track “Nikko.”  Built around the swirling patterns of repetition typical of Nik Bartsch’s Ronin, “Nikko” incites a resilient pace, speeding right along.  But not unlike the pattern of fast builds and sudden launches into space established in opening track “Un Simple Objeto,” Teubal restricts his use of Bartsch’s constructions to the intervals, allowing space for members of the sextet to stretch out… the repetition acting only as infrastructure.

“La Perla” begins sprightly on its toes.  Up-tempo, yet in possession of a buoyancy that transcends its cadence.

The album ends with “Milonga Para Terminar,” a whiling dervish of percussion, an unstoppable torrent of rhythm.  Led by Hadfield and Takeishi, it’s an odd ending to the album, but apparently a favorite composition of Teubal’s as signifier that, bam, the show is over.

Originally from Argentina, Teubal may now be residing in NYC.  This music is definitely informed by both locations.

The physical CD is also available at Teubal’s own site.