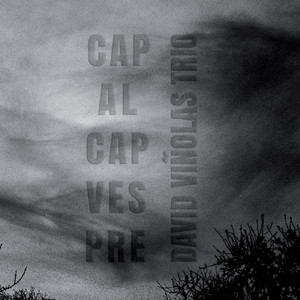 The combination of a raw edge and casual delivery is an arresting quality on the debut from drummer David Viñolas.  The pieces that comprise Cap al Capvespre appear to be only loosely tethered to compositional ideas.  Perhaps that’s how they were meant to be.  Perhaps Viñolas didn’t provide his trio a route to travel so much as a couple points of interest for the musicians to meet at along the way.  Whatever the intent, the consequence is a seriously appealing nonchalance to counterbalance the slow pours of blues and thick streaks of European post-bop that mark this excellent releases as belonging to the modern day.

Some tracks fall into the stylistic category of “Impro #1 (nit a la Segarra),” with its prowling tempo and fragmented melody.  This applies even to the moody “Redibuixant el camí,” which slowly finds its voices and sings a little song.  But even when the cheerful “Siempre se Hace lo que se Puede (Song for Marko)” adds an upbeat tone and focused melodicism to the proceedings, it snaps right into place with the album tracks that fall around it.  Two pieces that add some serious intrigue and immense fun are a rendition of The Beatles’ “Hey Jude” and Erik Satie’s Gymnopédies.  On the former, the way that saxophonist Albert Bartolomé drawls out the melody is plenty enjoyable, but when the trio breaks the song down into a free-for-all, the level of enjoyment shoots up dramatically.  That it circles back around for a comparably chipper rendition of the original version’s finale makes for a satisfying conclusion to the trio’s inspired rendition.  Their adaptation of Erik Satie’s Gymnopédies is no less inspired.  A solemn tone and a martial cadence allows the melody to exhale slowly, but then the trio gives the piece the same breakdown treatment as they did Paul McCartney’s composition.  Of especial interest is the way bassist Aleix Forts hops around the torrential downpour of Viñolas’ drums.  And then, as it did on “Hey Jude,” the ferocity and chaos returns to the original solemn tone for the album’s final notes.

This album was released back in 2014, and really deserved to be part of the discussion when compiling year-end lists.  Do not let this album fly under the radar any longer.

Released in 2014 on Quadrant Records.

Preview a track from Tim Berne’s and Matt Mitchell’s new album These are videos that I like: David Vinolas Trio on the rooftops