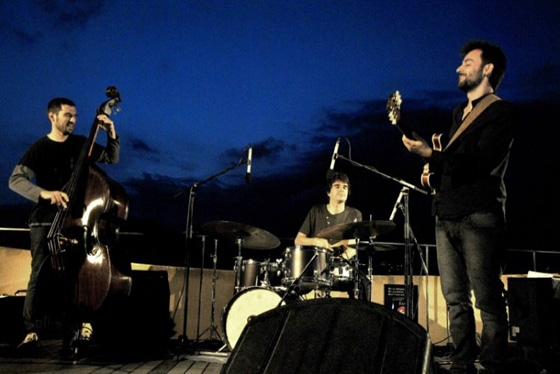 The Bridges Trio of Alfons Bertran, Guillem Callejón, and Dimas Corbera put out their self-titled debut in 2009.  It’s a nice enough recording, a guitar trio session that had some personality, but wasn’t terribly expressive.  It was a fine debut, but fair to expect something more on their sophomore release.

Something more did happen on their follow-up.  Things changed dramatically with their 2012 release Mans.  The Catalonia trio gave voice to a jazz guitar trio recording with a profound folk music perspective… one rich with powerful melodies, percussion that enhanced the music’s seaside ambiance rather than hobble it, and a rustic charm reminiscent of Bill Frisell’s Americana Jazz.  For Mans, the trio added the pedal steel of David Soler to the mix, and the combination of that instrument’s quavering, ethereal presence and the trio’s strong compositions resulted in one of the better albums of 2012.

Songs like “Cádiz” and “Lucano” illustrate both of those new characteristics.  Evocative melodies that express themselves at a languorous enticing pace give the rhythm section all kinds of time for thoughtful, patient phrases, even when they charge into an excited patter.  When Callejón solos on guitar, applying just the right amount of heat, Soler’s pedal steel circles about like a lazy Sunday afternoon, instilling a casualness that is as luxuriant as it is beautiful.

And then there are tracks like “Big Mike’s” and “Postlude” that utilize a bit of looping and effects to create an electric miasma from which sleepy guitar notes spring forth like waking dreams.  The dark tones of Corbera’s bass, here as throughout the album, provide a comforting shadow from the bright tones of percussion and guitar.

But it’s not just an album of slowly drifting tunes.  “El Passeig” lets the melody ride the back of a chipper melody that scoots right along.  “Tot Sol” is all about Bertran’s drumwork, as he spurs the quartet on at a speedy clip.

In the end, however, though the tides of Mans shift from song to song, they give picture to the same scene, same voice, same demeanor… of a seaside serenity and folk-jazz charm. 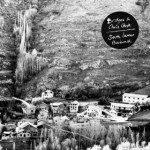 That particular mode of expression continues on their new release, 2013’s South Lamar Boulevard… strong melodies delivered with confidence and patience, giving them time to reach full bloom before expanding onto new potentials, and a rhythm section that provides sleepy music sparks of wakefulness to keep the brain fully engaged.

Smartly, the trio brings Soler back for another round, and in an equally shrewd move, they bring tenor saxophonist Chris Cheek in to the mix. Cheek is having a very strong 2013 with his contributions to albums like the similarly-minded serene beauty of Pierre Perchaud’s Waterfalls, and he fits right in with the Bridge Trio’s prevalent state of mind. This is a pace at which Speed is right at home.

Cheek’s effect on the unit is fully realized on tracks like “Furn Esh Shebbak” and “Pau,” tunes that, on the previous recording, might have drifted a bit too far from center.  But Cheek’s strong but restrained presence on sax serves as a binding agent for Bertran’s airy brushwork and Callejon’s guitar murmurings.  Corbera speaks up on bass here and there, but not with the intent of corralling the group so much as reminding them of the path ahead.

On “Banter,” Cheek’s sax gets some separation from the rest of the quintet, but the occasional returns to melody have them meeting on common ground, and the imagery is akin to that of a seagull soaring just feet from the water’s surface.

And though Cheek’s inclusion provides the affair a weightiness not present on Mans, there are still plenty of moments, like on “The Album” and “Smoked Eggplant Ravioli,” in which wavering notes descend as would a slowly enveloping mist.

“Serendipia” features a fine solo by Callejón, working off Cheek’s statements of melody, as Soler criss-crosses the pair and ties them up in a bow.  “Snails” has a touch of mainstream polish, laying the melody on a bit thick, but the tune’s up-tempo approach suits the album well in terms of diversification.  “Artlessness” also has some zip to it.  The quintet establishes a brisk pace, keeping just enough space in between for crisp statements, with even Soler’s pedal steel moving right along with the crew.

The album ends with the title-track, a song that embodies so much of what made Mans great and what endures in South Lamar Boulevard… a dreamy ambiance, a luxuriant melody warm enough to fight off the winter cold, and rhythm with a personable chatter.  Just beautiful.

Go get both albums.  You won’t be disappointed.

Mans was released in 2012 on Quadrant Records.

South Lamar Boulevard was released in 2013 on Petit Indie.