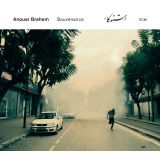 Oudist Anouar Brahem has consistently recorded some of the most mesmerizing music for the ECM Records label.  Early in his ECM recording career, it was pieces that situated themselves primarily in the folk music category.  Some improvisation of a jazz(ish) nature would get thrown into the mix, especially if saxophonists John Surman or Jan Garbarek sat in on a session.  But mostly it was charming folk tunes that cast a heavy, captivating spell with bouts of liveliness eclipsed by contemplative passages.

Things really got mesmerizing with his 2002 release Le Pas du Chat Noir and 2006’s Le Voyage de Sahar.  For those recordings, Brahem switched to a trio format of himself, pianist Franҫois Couturier and accordionist Jean Louis Matinier.  This was the real deal.  Courturier brought a serious elegance to the affair on piano and Matinier’s accordion offered up a thick, wavering drone.  These two qualities both meshed with and contrasted against the patient, charming tones from Brahem’s oud.  It was the perfect mix of contemplative and extroverted.  The effect was almost hypnotic.

It’s been a handful of years since he released the gawkily titled, The Astounding Eyes of Rita.  That album got him back to a more talkative demeanor.  It was one of his more bustling works since the early days.  For those who had grown enthralled with the chamber-folk sound of his previous two recordings, it was something of a letdown, despite being an enjoyable recording.

Brahem’s 2015 release, Souvenance gets back to the chamber-folk hypnotics, but in a new, exciting way.  Apparently inspired by the political and social upheaval in his native Tunisia, Souvenance is supremely captivating.  Francois Couturier returns on piano, Klaus Gesing joins in on bass clarinet and Bjorn Meyer adds his bass, but it’s the addition of the Orchestra delia Svizzera Italiana that’s the real reason for excitement.  Effectively, it takes on the role of the accordion drone, and because of its bigger presence and detailed sound, it delivers a seriously evocative punch.

But Brahem doesn’t overdo it with the orchestra.  For the most part, the contribution by the orchestra is both sparing and tasteful.  This is especially fortuitous in that it allows smaller interactions to take center stage and receive the greatest attention.  There is the amicable chatter of oud crossing paths with the deep resonance of clarinet and there’s the meditative pulse of piano locking in step with the lively patter of percussion and there are the melodic bursts from piano matched with the drifting flutters of clarinet, and surrounding it all like an enveloping mist is the striking warmth of orchestral accompaniment.

In many ways, this is a big departure for Brahem from past recordings.  The sound is something new.  But as far as the music’s captivating presence and arresting, almost trance-like demeanor, this is, in fact, a return to what made past Brahem recordings resonate so powerfully, and it’s why Souvenance is a winning album.

Music from the Tunisia scene.

Stream an album track at the ECM Records site.

Here’s an official making-of-the-album video type of thing.  It scoops up most of the album track, “January,” though it was somebody’s harebrained idea to interrupt the absolutely gorgeous music with conversation and whispering.  Whatever.  Still worth checking out.

These are videos that I like: Lucas Pino Quartet – “Look Into My Eyes” Recommended: James Davis’ Beveled – “Beveled”