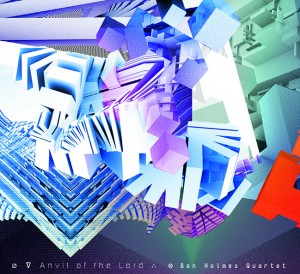 If there’s one word emblematic of trumpeter Ben Holmes sophomore release Anvil of the Lord, it would be ‘propulsion.’  There is a steady relentlessness to this music that drives each album track, giving a sense of perpetual forward motion to even the slower tempo pieces.  It creates an undeniable immediacy, and a fruitless endeavor to try steering the interaction.  This album is like a shark.  If it stops moving, it dies.  That constant propulsion marks this album.

But it’s not the only quality that makes it special.

Fifth track “Otesanek” brings out the Romanian influence that other tracks hint at.  After a nice duo between trumpet and bass, it moves into a section that can be traced to Balkan music origins, and starts hitting on the same intoxicating buttons.  It’s an area that saxophonist Jessica Lurie has been mining for years now, and with wonderful results.  The folk music of this area just seems to pair so well with the myriad of possibilities of jazz improvisation.

Throughout this album, Holmes infuses the compositions with varietals of Southeast European music.  A waltz at heart, the song “Kingston” sounds as if it wants to evolve into a Romanian folk song.  It skitters and shakes, but just can’t come out the other side, and it’s that incubating tension that gives the track its energy.  The walking bass lines and post-bop trumpet phrasings of “Song for Creel Thompson” share the same space with the Klezmer affectations of “Moved Like a Ghost.”

This is also a quartet of two duos.  Holmes synchs up his trumpet with Hassellbring’s trombone and Pavolka and Sperrazza do the same with bass and drums.  And within each song, those pairs meet up in places, find common lines of communication, and interact.  But the album sounds often like it’s brass leading the way and rhythm section impelling the music ahead from behind.  It’s this quartet-of-two-duos effect that’s the primary contributor to this album’s nifty perpetual forward motion.  I’m not implying that the quartet members weren’t working in tandem, but an apropos analogy would be of four people carrying a long sofa… the two people out front and the two people bringing up the rear are going to be concentrating on getting in step with the person at their side before attempting to marshal the forces at the “other end of the sofa.”  The natural push and pull of a little bit forward then a little bit back then forward several steps, it’s a construct of perpetual locomotion.  And as far as defining characteristics go, it’s an enviable one for an album to possess.

This really is a wonderful recording.  Highly recommended.

Listen to two album tracks on the artist site.

Released on the Skirl Records label.

As an aside, I’d like to really commend Skirl Records on the presentation of this CD.  It comes in a DVD-size box, and has the beautiful art design of Hjalti Karlsson and Jan Wilker, who form the company Karlssonwilker.  Everything about this package is very cool.  My eyes popped open wide when I first opened the mail and slipped this album out of the mail packaging.  It made a hell of an impression, and I know I wasn’t the only one struck, because I exchanged a couple tweets with someone who had the same reaction and mentioned it on Twitter.

Learn more about the Skirl Records collaboration with Karlssonwilker HERE.

Now, that’s how to package an album.  Excellent job, to everyone involved with this.

Andrés Þór – “Mónókróm” The Wrap-Up: Using a liberal definition of the phrase “Bird is the Worm News”