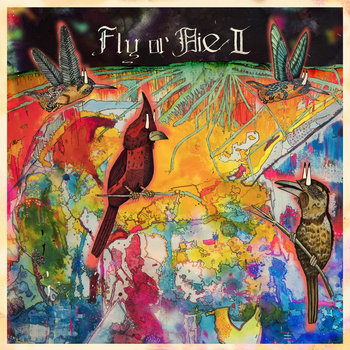 It would’ve been so easy to do the same thing.  It wouldn’t even have been a bad thing.  Had Jaimie Branch made the second installment of her Fly or Die series the same as the first, it would’ve been more of the good stuff, and that would’ve been quite all right.  But she didn’t.

It would’ve been so easy to do something completely different.  It wouldn’t even have been a bad thing.  Had Jaimie Branch made the second installment of her Fly or Die series the polar opposite of the first, it would’ve been something brand new from an exciting artist, and that would’ve been quite alright.  But she didn’t.

The trumpeter situated herself dead center of possibilities, and that was best of all.  Rather than duplicate a winning formula, and, conversely, rather than turn her back on it and make dramatic changes for the sake of change, Branch added depth and nuance to what was familiar, and brought unity to what is old and new.  On Fly or Die II: Bird Dogs of Paradise, the electro-acoustic posture maintains the lean toward each extreme, but influences of chamber, Latin, rock and bouquets of percussion round things out in a way that makes it so it ain’t a duality at all.  The trumpeter’s pure aggression, raw melodicism and punches-in-bunches style haven’t gone anywhere, but they’re given new life with the new approach.  As I stated in my write-up of this album for The Bandcamp Daily, “Branch’s debut made a formidable impact, which makes the achievement of her sophomore release that much more impressive. It can take half a lifetime for an artist to discover their voice, and sometimes even longer before they can bring that voice into focus.”  The timer had barely started ticking before Jaimie Branch hit that mark.