I got to see Bill Frisell perform the other night.  He was in town with his Big Sur Quintet, putting on a show at Louisville’s Clifton Center, a nice multi-purpose venue in the Clifton neighborhood.  The concert was held in a theater setting… stage, auditorium seating, balcony, big curtains, and the kind of variable lighting that kind of joint has available to it.

It’s the second time I’ve seen Frisell there.  The first was a solo show, and the intimate setting worked perfectly for that kind of set-up.  It also worked great with Frisell’s new line-up.  The Big Sur Quintet, so named after the 2013 recording Big Sur recorded by the same crew, named after the California coastal region where Frisell did a residency and became inspired to write the compositions for the recording. 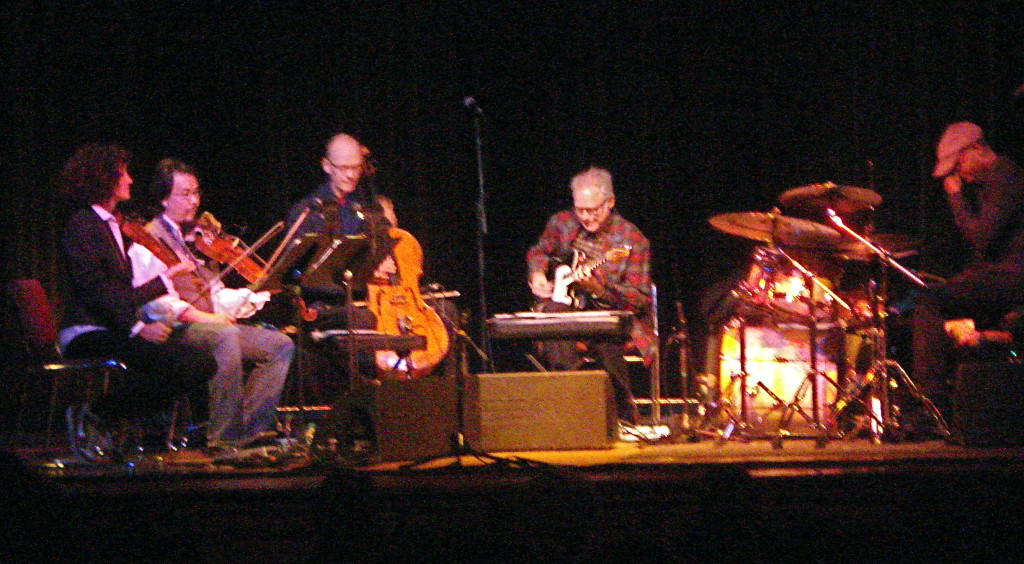 It was a packed crowd.  Very few empty seats.  Not a many decent jazz acts come through Kentucky, and I’m often embarrassed by the number of empty seats for those rare shows that do come through town, but tonight was a very nice turnout.  This is, no doubt, in part due to Frisell’s crossover appeal.  He plays a kind of music that transcends genre, perhaps, even, is its own genre (Frisellian is a word I’ve used to describe music similar to his own.  Americana Jazz is the phrase most often associated with his music.  My dear friend Zachariah once referred to (early, ECM-days) Frisell as ‘voodoo jazz,” which I thought apropos at the time).  Another reason for the big crowd might be the fact that Frisell does stop often in Louisville, and when an artist makes a city a frequent tour stop, that artist tends to develop a big following.  Of course, the biggest and best reason that Frisell draws crowds… his unique style of music is a joy to hear.

The musicians were seated in a semi-circle at the front of the stage.  Scheinman, then Kang, then Roberts, then Frisell, who directly faced the audience, and the Royston and his drum set on the other side, completing the semi-circle.

“Going to California” opened the show. It began as a skittering of strings, scratching at the surface of the ears.  It then grew into the melodic force of nature that’s represented on the album… bold thick brush strokes by Kang and Scheinman, bright notes from Frisell matching up well with the crackle of Royston’s drums.  Cellist Hank Roberts often carried the weight on this tune in providing some deeper resonance to give the melody a sense of permanence and root.

“The Music of Glen Deven Ranch” was given enhanced rhythmic qualities as compared to the studio version.  That was an element that manifested throughout the show.  “A Beautiful View” had an expansive feel, the melody sounding BIG, drums buffeting it further skyward.  Royston was exceptional on drums.  He has such an expressive style, but never seems to step over anybody’s lines or toes.  His style is different than that of Roy Haynes, but the way their approaches mesh with their collaborators is very similar.  On a few tracks, Royston spurred the quintet on to faster speeds, taking tunes from a languorous pace to something far swifter… gone, just like a train.

“The Big One” had the same rock ‘n roll disposition live as it does in studio, though Royston’s presence on drums is that much more intense hearing his drums live.  It’s always nice to hear Frisell accentuate his guitar’s twang, something that is only alluded to on many studio performances.

“Song for Lana Weeks” was one of those songs that an ensemble can just hop onto the melody and take off into flight.  Roberts’ cello was at the steering wheel of this particular song, and the quintet seemed to feed off his energy.  The crowd did, too, and it was nice to hear them repeatedly express their appreciation.

Just a great show.  I highly recommend checking them out if they come through (or near) your town.  Here’s the Tour page on Frisell’s site.

And here’s A LINK to my review of Frisell’s 2013 release Big Sur.