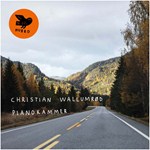 After so many projects with massive productions, it’s refreshing to hear a solo piano recording from pianist Christian Wallumrød.  Taking a spin on a number of grand pianos, and utilizing a number of editing and recording techniques, Wallumrød’s 2015 release Pianokammer allows him the space to show the bare elements at the heart of his unconventional music.

The extended drone of opening track “Fahrkunst” possesses a wavering tone, barely above a whisper, whereas “Hoksang” is a deeply melodic reverie, emphasizing the joy of a daydream over its introspective quality.

“Second Fahrkunst” returns to the opening’s drone, but pelts it with raindrops of notes, falling with an infrequency and unpredictable pattern that thwarts the possibility of the drone lulling the listener to sleep.

“School of Ecofisk” begins as merely a murmur, then breaks into a rapid chatter of notes, an expression where dissonance reveals the soft beauty within.

The easy-going “Boyd 1970” reflects the gospel elements that Wallumrød brings to his various projects.  He gives this tune a sunny disposition, whereas on the album finale, “Lassome,” the church music exhibits a bigger, effusive presence.  Where “Boyd 1970” was a kick back and enjoy track, “Lassome” is more a call to action.  It fades out to the wavering drone of the opening track, coming full circle by concluding on the same note that set the whole album into motion.

It’s a fascinating look into the quaint eccentricities that inform so much of Wallumrød’s grand productions.