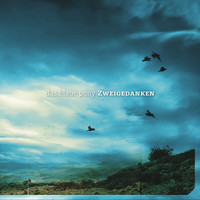 An album I’ve been particularly enjoying lately is Zweigedanken, the debut album by Das Blaue Pony.  A quartet led out by two saxophones, they display an appealing restraint that leads to a nice contrast between the weight and heat inherent in the lead instruments and the soft warmth generated by their expressions.

This especially comes into play on a track like “Abschied (im Guten),” where saxophonist Johannes Moritz switches over to bass clarinet, providing a resonant hum as a balance to the spry flightiness of Sebastien Wehle‘s soprano sax.  And the contrast between tenor and soprano saxophones is no less potent.  On “Der Schwarze Peter,” the woodwind sighs float harmoniously across the room, while the rhythmic diversions of drummer Phillip Scholz accentuate their fluttering beauty by sometimes matching their cadence and sometimes counteracting their weightlessness.

Das Blaue Pony doesn’t offer up strong melodies so much as great opening lines to chapters.  Songs like “Sturmvogel” and “Der Rückzug der Eisbären” treat their melodies more as concepts than concrete statements, and it’s a big reason why this music maintains a beautiful drifting ambiance despite an instrumental array that could lead to the sharp angles and distinct lines of a hard sonic geometry.  The latter of those two tracks has bassist Robert Lucaciu providing one of several rhythmic volleys he scatters throughout the recording.  These flurries are typically brief with an economy of lyricism, and it’s the way in which they insinuate themselves seamlessly into the flow of an otherwise fluid conversation that makes them so damn compelling.  Scholz performs a similar feat on drums at various intervals, and the way in which both wind instruments play off the percussion leads to some tiny thrills.

There’s no lack of heat on this recording, but it’s dispensed in small doses.  Most tracks fall in line with “Eintagfliege,” which has the quartet rearing back their heads for a brief shout to the skies.  This is typically preceded by a slow build up from a mild serenity and a subsequent descent back down to it just as the song reaches its conclusion.  This pattern, thankfully, isn’t without deviation.  Tracks like “Der Schwarze Peter,” “Schwalbentiefflug,” and album-closer “Das traurige Pony” keep to the quiet end of the spectrum, letting peace reign, and allowing that wonderful contrast of heavy and lightness envelop the song.

A very enjoyable recording, and one that keeps getting better to my ears.

Jazz from the Leipzig, Germany scene.