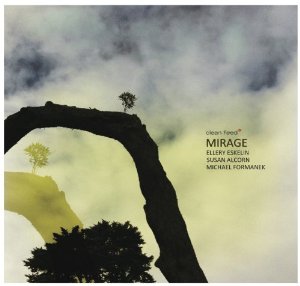 Mirage, the new release by tenor saxophonist Ellery Eskelin, is not unlike glimpsing a ballad through a thick fog.  There are intervals of time when the music is briefly out of sight, but the ears fill in the gaps between what came before and what presents itself now… inspiring imagination even as the song remains in place, moving barely at all.

Fully improvised, Mirage is evidence that fluent, lyrical conversations between musicians need not be sacrificed in order the achieve the magic of spontaneity.

The album has a mesmerizing cadence, even as it achieves speeds that one would not necessarily associate with such a characteristic.  For instance, when opening track “Rain Shadow” transforms into a runaway train, it doesn’t shake the peaceful disposition with which it began.  And “Meridian” proceeds cautiously, as if the trio were traversing a pitch black room, and yet the confluence of their sound gives the impression of overcoming their blinded condition hand-in-hand, as one.

“Divergence” is a triple helix of interrelated notes, all signifying different character traits, but all belonging to the same breathing entity.  It is a song of three paths that intersect at points that present themselves as logical meeting places, and result in a satisfying feeling of everything happening just as it should.  This, for an improvised piece, is something that cannot be overvalued.

For a person who could be loosely categorized, understandably, as an avant-garde musician, Eskelin doesn’t exactly offer up his saxophone as something that forges a path ahead with the expectation that it is the listener’s responsibility to keep up.  He looks over his shoulder to be sure the listener is still there, often turning around for face-to-face conversations.  It’s why Eskelin’s music is suitably accessible, even as he advances ahead to new horizons of expressiveness.

“Saturation” is a race down a flight of stairs, and where the only way to pass the person in front is to leapfrog over them.  It creates an appealing sensation of a loping tumble, a staggered motion more likely to hypnotize than distract.  “Refraction” begins as formal dance, develops into motion much freer and posture bordering on statuesque.

Alcorn’s pedal steel guitar contributions add a dimension to the music that enhances its peaceful nature while also triggering the brain synapses to engage with it… a daydream presence that elicits powerful imagery juxtaposed against a drowsy state.

The album’s centerpiece is “Downburst,” a sprawling 27-minute piece that incorporates the recording’s varied facets under one roof, and illustrates how Mirage is one long conversation.  Individual songs, though separated by the bits of silence used to create the format of songs and album, don’t perforce represent separate dialogues… they are all one, all part of the same spontaneous, fluent conversation.

If you want the CD, it appears that it is only available directly from the artist, which you can order, HERE, on his site.

More about the musicians:

I link to Eskelin’s site in the intro above, but he’s also got a blog that I recommend checking out.  I peruse it from time to time, and find it both insightful and enjoyable.  You can get there following this LINK.

Aside from checking out more of Eskelin’s own recordings, if you haven’t already, I suggest picking up Ben Goldberg’s Unfold Ordinary Mind, an excellent album I reviewed earlier this year, and on which Eskelin is just oustanding.

Michael Formanek also received a warm reception on this site for his 2012 release Small Spaces… a review you can find by following this link.  He’s an in-demand bassist, and it’s easy to see why.  I like his style, both as player and, perhaps more, as composer and session-leader… even if I don’t connect with all that many of his recordings.  Formanek certainly isn’t alone on my short list of musicians with whom I struggle with their music yet continue to listen to new ventures with a happy anticipation for what comes next and how it might grab my ear.

As far as I can tell, this was my introduction to Susan Alcorn’s music.  I love it when pedal steel guitar is included in a jazz session.  It’s such an odd sound judged on its own merits… so beautiful and mysterious and haunting all at the same time.  To hear it included in a jazz setting, it just enhances all those qualities by way of it being such an unusual instrument to be incorporated in Jazz… it challenges the ear for acceptance.  Anyways, here’s a link to her site so you can learn more about her and her music.

Links to Eskelin’s sites are above, and the link to Formanek’s site is found in my review of his last album, linked to above, too.