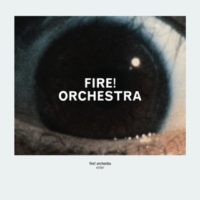 The trio of Mats Gustafsson, Johan Berthling and Andreas Werliin has expanded into something much more than its original vehicle for improvisatory music.  Now repped as Fire! Orchestra, the 25+ member ensemble is reminiscent of avant-garde big bands from the previous century, but their infusions of pop music and avant-rock keep this music planted in the soil of Today.  Their previous album, Exit, presented the ensemble in a live setting.  I used to think that it was a thrilling album.  But now, after spending the better part of this year listening to their 2014 studio release Enter, the live recording just doesn’t hold quite the same magic it once did.

Enter is about as thrilling as it gets.

And whereas the ensemble brings to the studio the same combustible personality and the dense walls of dissonance and harmonies, they produce a tighter sonic bundle, whereas the live recording tended more to formlessness and wandering.  But don’t misinterpret… thankfully, Fire! Orchestra is still all over the place, but there is a greater sense of focus and unison in how they go about it.  The term “organized chaos” is undoubtedly apt… a crowd of moving parts in perpetual states of collision, and yet possessing a pop music sensibility that makes this recording supremely embraceable.

“Part One” begins with the slow exhalation of melody, growing increasingly combustible.  The lovely harmony of voices ignites into a flash of dissonance, returning only later, now heavy with the blues and not a little bit aggressive.  The dissonance lights back up, this time with horns and saxes providing the flame while bass and drums go to town.

“Part Two” grinds out a catchy groove, which, in turn, gives way to a wall of dissonance… the sound of a bank of circuitry crashing down, lacking subtlety, a hard unforgiving poetry.  But this is just another moment for a big reveal, as the dissonance sputters out and the peaceful harmony of wind instruments fills the void.  It’s these shifting tides and the way listenability isn’t sacrificed for raw energy that elevates the album up a notch or three.  The build-up to the grand finale inches forward, gaining strength through accretion and perseverance.

“Part 3” is all about the vocal experimentalism, in particular how voices and woodwind shrieks become almost indistinguishable, leaving the ears to figure out who is true and who is the chameleon.  The rising tides go out with one final big wave, and that it crests heavy with the blues makes all of the unconventional sounds and expressions sound comfortingly familiar.

In the 90s, a group of disparate artists made a proclamation about a new movement.  They called it Avant-Pop, and its goal was one in which challenging art, rich with complexities and nuance, would be shrouded in a populist sensibility, and thus subversively become entrenched in the minds and hearts of the masses.  When I hear a song like “Part 4,” I can’t help but think that this was something that the Avant-Pop creators had in mind.  A delectable melody, cooed out by vocalists and shouted out by instruments, an easy melody to ride as an army of avant-garde musicians march an avant-garde album to a close… with a song that seems almost simple, a final impression on an album that is anything but.  The song repeats that catchy melody, sometimes gently, sometimes in a powerful surge, and the song’s momentum becomes almost mesmerizing as a result.  The final surge, however, is sufficiently fierce to break any hypnotic state, but, amazingly, the song retains its tunefulness amidst the jarring intensity of the finale.  It’s amazing, until one considers that Fire! Orchestra began doing it right from the album’s first note.

Immeasurable and transcending classification, this is creativity that crashes through boundaries and preconceptions. So damn good.

Music from the Scandinavian scene.

You can also purchase directly from the label, Rune Grammofon.

Farmer serenades cattle with trombone Nicky Schrire – “To the Spring”