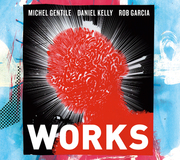 Don’t stop reading just because the word ‘flute’ comes up early in this review. I know it’s one of those words. Some sub-genres of Jazz incite polarization. Other words like “vocals” and “electronics” have the same effect… some listeners define themselves as not being much into those things. Flute is another such one. And it’s understandable. It seems like the flautist is presented with more risks when they’re out front leading an ensemble. If the flute tries to up the tempo or bring some heat, it often sounds breathy and shrill, but if it tries to keep to the lower ranges and tamp the pulse rate down, it often sounds hollow and monotonous.

Works, a trio recording by Michel Gentile, Daniel Kelly, and Rob Garcia, is full of tiny thrills, evocative interludes, and a charming buoyancy, and it’s a great example of why one should never dismiss an album because it possesses one of those words that would typically be a deal-breaker.

The album opens with “Island,” a song predisposed to moody expressions, but maintains a brisk pace. Kelly establishes the darker colors right at the outset on piano, and Garcia’s percussion work adds a distinctive sharp flavor. Gentile follows shortly after with a flute section of humble beginnings… reticent to reveal too much on first introduction. But, eventually, he becomes more verbose, but even here, Gentile never veers into the realm of the melodramatic… his flute remains a source of pleasant, interesting conversation.

Kelly acts as the supreme ombudsman between the higher, airier, melodic flute and the brasher, earthier drums. By focusing on the deeper range on keys and accentuating the piano’s rhythmic qualities, he balances flute’s and drums’ defining characteristics with an effective counter-balance. It meshes perfectly.

Most tracks keep to a steady gallop, but some tracks do allow the listener to catch their breath. “C’est Bien Ca” moves with the unhurried pace of ladybugs on a thick green leaf on a summer day, with intonations on piano and flute that rise and fall like deep breaths, and drums that gruffle with sounds of an afternoon nap. And “Chorale” is a series of murmurs and allusions, making the listener meet the trio half-way to fully connect with the tune’s message.

Gentile lets his flute perform a series of acrobatics, but never lets it devolve into the theatrical. With a fluency reminiscent of fellow flautist Carlos Ward, Gentile is able to sound grim without becoming acerbic, celebrate beauty without becoming superficial. There is an undeniable grace evident in his play.

Three of the album tracks are solo pieces for each of the trio members, allowing them to stretch out on their own. Gentile lets his flute roam free. Kelly gets a nifty sound with a prepared piano. Garcia adopts a staggered gait fun to watch develop.

And, really, all of this music is fun, even when it paints a sky with grey clouds. Tracks like “Emanglons” and “Hundertwasser” exemplify the album’s tendency to take off in flight and soar, bringing the listener along for the ride. “Voir Dire” and “Will” also bring a breathless excitement to the music, but more akin to wild scrambles up and down staircases.

Just a winning album. Should inspire plenty of smiles, and should overcome anybody’s predisposition to overlook jazz flute albums. Don’t pass this one by.

Released on the Connection Works label.

Jazz from the Brooklyn Scene.

Kora Band – “The Contract” My new Jazz Picks are up at eMusic.