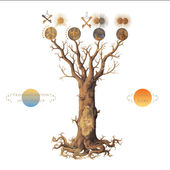 The last couple of years has seen a new facet to John Zorn‘s music series based on mysticism and religious texts.  The Gnostic Trio, comprised of guitarist Bill Frisell, harpist Carol Emanuel and percussionist Kenny Wollesen, create music of a serious beauty.  Supremely melodic and possessing a motion that remains fluid no matter how much the trio tweaks it.  On their newest, Transmigration of the Magus, they expand their lineup to include additional musicians on harp and percussion (Bridget Kibbey and Al Lipowski) and John Medeski on organ.  The result isn’t a change in sound, but a shift in the music’s perceived depth… by doubling down on existing instrumentation and adding an additional element (organ), the music’s heart beats stronger and resonates with greater strength from within.

Neither the melodicism nor the spiritual aspirations of the music show any sign of faltering when Frisell and newcomer Medeski work a catchy groove into the seams of the song on title-track “Transmigration of the Magi.”  This is true, also, when the tone takes on a sense of urgency on the compelling “Providence.”

But, mostly, this music falls right into line with the trio’s four previous recordings (The Gnostic Preludes, The Mysteries, In Lambeth, and the Testament of Solomon).  “The Three Fold Thought” is emblematic of that potent mix of supreme melodicism and a captivating, flowing motion.  Wollesen’s insistent vibraphone lines intermingle with Emanuel’s sweeping harp passages as Frisell fires off one melodic gem after the other.  It’s just now, the music includes elements like the shimmering harmony of Medeski’s organ adding texture to the thin divides between melody and rhythm.

Simply another beautiful album from a beautiful series of collaborations.

Released in 2014 on the Tzadik label.

You can also buy the CD directly from Tzadik, and the price is comparable to Amazon’s.  Plus, it’s always better to buy directly from the artist/label.

You can read my recommendation of the Gnostic Trio’s The Mysteries on this site (LINK).  It was slotted as the #9 album on the Bird is the Worm Best of 2013 list.  I still listen to it quite often.  It is mesmerizing.

Recommended: Dave McDonnell Group – “The Dragon and the Griffin” These are videos that I like: Emil De Waal, Gustaf Ljunggren, Søren Kjærgaard & Elith “Nulle” Nykjær – “Stjernestunder”