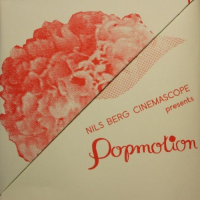 The compositions on Popmotion are inspired by videos that Nils Berg Cinemascope found on Youtube and Vimeo, of people from all across the planet, from places as varied as Brunei, Ghana, Sweden, the U.S. and Japan, expressing themselves through music.  A few of the videos were filmed by Berg himself.  Others were found while sitting in his home.  A whole wide world of music coming together in one place, inspiring more music.

As Nils Berg explained to me in an exchange of emails,”The overall idea is to prove that there could be music, or great art, anywhere.”

Basing his compositions around these videos, and in some cases, inserting samples of the music directly into the music, Nils Berg took all these disparate elements and focused them through his own creative vision.  He collaborates with the world.

On the inclusion of segments of the videos that inspired each composition, Berg said, “We really have to love these performances by the video guests, and care for them to make them thrive and blossom.  You just have to look carefully, and be open to the fact that everyone is expressing themselves with heart and soul, and are great musicians or performers.”

It is easy to forget that they aren’t all in the same room.

In Japan, a roomful of musicians are rocking out on koto.  Berg gives their music wings, lifting off on bass clarinet with languorous notes that contain a deceptive propulsion.  Cantillo’s percussion adds permutations on the kotos’ hypnotic rhythm.  Kallerdahl’s bass blends in with the kotos, guiding from within as if they were in the studio together, collaborating on the song “We Are Nobody.”

On “Benibanatsumiuta,” the trio gives the airy sound of a bamboo flute a dark undercurrent, a probing inquisitiveness to what, by itself, was a lighthearted reminiscence.  And despite the emotional shift, they all sound on the same page, with the same motivations and aspirations, as if the finished product was what they each envisioned, though their contributions were performed on different parts of the world at entirely different times.

By combining the sound of a traditional song performed solo on an African gyil and a 19th century Christian hymn performed on bowed dulcimer, and then adding their own instrumentation and visions, Berg’s trio creates “Accra Underground,” a modern jazz piece with a polyrhythmic shuffle and a zig zag bass clarinet.

Yellow flowers fill the screen on”Benibanatsumiuta,” which begins as a Japanese folk song on bamboo flute and koto.  The Cinemascope trio simply add their own gentle textures to the mix, leaving the meditative qualities of the song undisturbed while, simultaneously, making it a more nuanced performance.  Berg’s bass clarinet is a prayer lifted up to the skies, and Cantillo’s percussion the sounds of a silent planet waiting for a reply from above.

Berg’s bass clarinet is the deep counterbalance to the airy notes of the cimbalom on the Romanian folk music of “Marlon,” which the trio guides into a nifty groove.  As much as any album song, it displays the care and craftsmanship the trio deftly applies to the composition’s original source music as they bring the music off a city street in Slussen, Stockholm and into the recording studio.

A performing troupe of musicians and dancers from Tamil Nadu set the table for Berg’s winding notes, Kallerdahl’s loping bass lines, and Cantillo’s percussion, scattered like stars, on the song “Orissa (In the Hands of the Lord).”  Voices raise up, mirrored by Berg’s woodwind, the sounds playing off one another though each miles apart.

I love an inspired theme.  When an artist presents a creative premise, I am all over seeing the project come to fruition.  But really, there is a value and nobility to inspired ideas that, in some ways, make the outcome irrelevant.  Creative ideas, like dreams, are building blocks of our humanity, just as they bind us to one another, and proof that as vast as this planet may be, we are all connected.

On Popmotion, Berg finds a way to exemplify both the vastness of our music breadth and the connections that tie it all in together.

Released on the Hoob Records label.  Jazz from the Stockholm, Sweden scene.

Videos that inspired album tracks can be found on Berg’s site HERE.  I include a few below.

Here’s one of the videos that Nils Berg & Company used as the inspiration for the tune “We Are Nobody” (streamed above).  Various musicians in Osaka, Japan.

Here’s one of the videos that Nils Berg & Company used as the inspiration for the tune “Accra Underground” (streamed above).  It is Aaron Bebe Sukura performing a traditional African piece on the gyil.