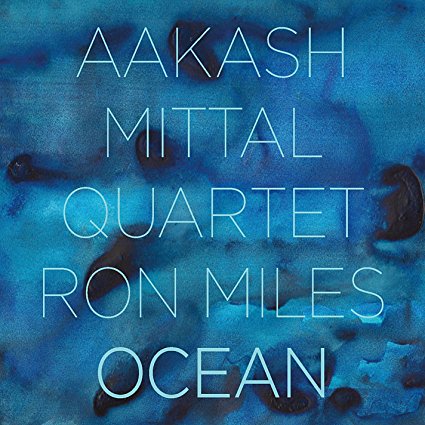 The transformations from one form of imagery to the next, and what they reveal about this album’s spirit is profoundly stunning on this 2013 release from saxophonist Aakash Mittal.  Oceans starts out with sufficient intrigue.  The opening tracks begin with an in-your-face drone, like a command to meditate, then shift into the motion of throwing punches inside the heart of the hurricane.  The ferocity continues with expressions that range from an angry groove to a breathless joyride to some straight-ahead action with a little swing mixed in with edgy post-bop.  And all of this is well and good and worthy of a fair surplus of esteem.  But it’s at the midway point of the album that Mittal reveals that it’s as much about the transformations between images as it is the imagery itself.

Trumpeter Ron Miles joins Mittal’s quartet of guitarist Matt Fuller, bassist Jean-Luc Davis and drummer Josh Moore, and he’s an excellent choice for this kind of voicing.  Even when dealing in dissonance, Miles weaves notes out of moonlight, and it’s why even at his most abrasive his music has the warmest attributes.  But with something like the title-track “Oceans,” a song that doesn’t possess form so much as it does a presence, and where the cries and squalls of melody float out across a surface of electronic effects and susurrant harmonies, that’s when that Miles moonlight effect shines its strongest.  And in the context of this excellent recording, that change from permutations of ferocity and cheerfulness, to suddenly break forth with an entirely new form of expressionism, and to make it logically fit into the framework of the album even if it’s difficult to exactly describe how it fell into place, it’s a jarring transformation.  It also marks the album for its best qualities.

“Without a Name” begins another transformation, utilizing a gorgeous melody for its launching point.  A couple of introspective improvisations delve into a nifty rhythmic dialog, and these lead into the next shift, where the melodic gentleness of “Without a Name” gives way to the fiery demeanor of “Insideout.”  The song traces sharp lines back to its predecessors while simultaneously pointing out the changes on the road ahead.

Jazz from the Boulder, Colorado scene.