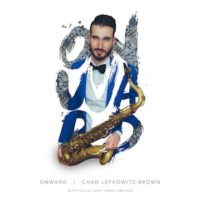 Plenty of enthusiasm on the newest from tenor saxophonist Chad Lefkowitz-Brown, and it’s pretty fun how he and his ensemble don’t hold back even a little bit.  This is true even on the ballad “The Nearness of You,” which slowly sways to and fro, but perpetually gives the impression of a hyperactive child ready to leap up and go running off the moment the parents stop paying attention.  A few tracks have a modern funk sound, and while nothing about them will instigate a recoil reflex, they’re not nearly as strong as those that stick to a modern straight-ahead sound.  Opening track “Onward” is the ultimate proof of that assertion, but “Franklin Street,” which features a guest appearance from trumpeter Randy Brecker, makes a strong case, too.  A nifty rendition of Coltrane’s “Giant Steps” is an added bonus.

Onward is plenty enjoyable as a fireworks show, where the sight and shape of the lights is just as thrilling as the boom and crash.

On the Air: Today, 6-8pm (EST) on WXOX ARTxFM Mingle These are videos that I like: University of Kentucky Jazz band at Elmhurst College