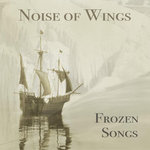 It’s the perpetual contrast in speeds on Frozen Songs that locks the attention in place.  The Ray Dickaty project Noise of Wings juxtaposes the patient melodic sighs of dual saxophones against a frenetic bass and drums delivery, and how those two elements collide and diverge and coalesce throughout a piece is more than a little bit fascinating.  On tracks like “Hymnal” and “New Rays of the Rising Sun,” the percussion comes in bursts of activity, and utilizes the silence to enhance the suddenness of their emergence.  The results can be quite stunning.  And they achieve a similar effect with the opposite approach on tracks like “Circle Stones on a Sundial” and “Veiled Motion” by unleashing a constant rhythmic downpour.  It fills up every empty space in the song, and sometimes saxophonists Dickaty and Maciej Rodakowski bob along its surface and sometimes cut a path right down its center.  It’s in these latter instances, where the dual saxophonists overtake the fervor of bassist Wojtek Traczyk and drummer Hubert Zemler, that the true depth of the quartet’s sound is revealed.

These Ray Dickaty projects each have something fascinating to absorb.

Recommended: Acrepearls – “Polar Sounds” Recommended: Trio Blastonal – “It Is What It Is!”