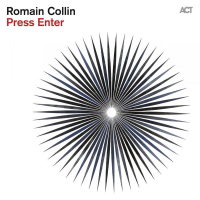 The melodic point of view delivered by Press Enter is so sharp and rings with such a resounding clarity that no matter how often pianist Romain Collin switches things up with each successive tune, it snaps right into place with the songs that preceded it.  Most albums have a flow, a development of perspective from one track to the next, but an album like this one does away with the linear progression as the sole method of travel.  Instead, Collin has fashioned a slowly rotating gem, and then shines a light on every little facet of the omnipresent whole.  It’s the type of construct that can bring everything within its embrace or, in the specific instance of Press Enter, it possesses the gravitational pull to bring even a tranquil rendition of Monk’s “‘Round Midnight” into the fold and sound right at home with Collin’s modern compositions.

The album leads out with “99” and a rapid-fire attack from drummer Kendrick Scott, but the melody just floats effortlessly in the middle of it all, in a sense detached from everything occurring in its wake and, in a much stronger sense, shaping everything the melody touches.  It’s that same reason why the subtler introspective tones of “Raw, Scorched and Untethered,” the abundantly cheerful “The Kids” and the dreamy “Holocene” all seem to radiate a melodic expression that originates from an unseen center of things.  This is more than just fitting pieces together for album cohesion… this is a rare instance where an artist is able to display an album’s melodic depths while simultaneously bringing each of its facets to the surface.  It’s not a series of album tracks, it’s an unbroken three dimensional circle, where the final song loops seamlessly back into the first.

Drummer Kendrick Scott makes his presence felt, and his hard etchings on the album’s tempo is essential to providing the context in which the album’s melodies are able to grow and thrive.  No less essential is the work of bassist Luques Curtis and cellist Laura Metcalf to provide the softer shadows to counterbalance the hard bright light that drummer Scott shines on the path of the songs.

Collin had given strong hints of this level of craftsmanship on his solid 2012 release The Calling, but, conceptually, Press Enter manifests with a far greater presence.  It’s a huge step up.

Listen to another album track on Soundcloud.