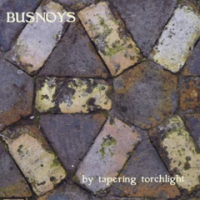 Back in the 60s, Bobby Hutcherson illustrated just how foreboding the vibes were capable of sounding, an aspect given additional color by Walt Dickerson from his collaboration with Sun Ra in the 70s.  Like the sharp sphere of light from a single halogen lamp on a pitch black warehouse lot, the traditionally bright and fuzzy warmth of vibes was imbued with the stark reality of skewed note patterns that created unease and kept the listener on their toes.  There was almost a menace to its guise.

But the opposite side of that coin is a sly cleverness, an escaped smile implying that a sense of humor lies beneath the dark mien, that the music is poking fun at itself even as it broods.

The music of vibes trio Busnoys speaks to those avant-garde days, of strikes over swing, of smouldering ferocity over foot tapping frivolity, and of subtle humor that’s there if one just listens for it.  With vibes like warning shots, bass that prowls the perimeter, and drums like a friendly slap on the back, Busnoys instills an atmosphere that is both modern and nostalgic.

Though the menacing countenance and the sly humor is emphasized in the review opener, that’s not to say that the trio doesn’t attempt to color the music with other emotional textures.  “Song for Grace Melbury” drifts on gently rocking waves, an ambient hum the tune’s undercurrent.  The gentle raindrops of vibes splashing down, creating echoes that send ripples across the silence and joined by the bass climbing up to meet it at the higher registers.  And there is the Toy Land march of “oom? PAH!” on which Pete Judge sits in with trumpet for a parade that initiates cryptic formations and adopts alien cadences.  On “Daph and Chlo On the Wobbly Bridge,” the trio stretch their legs, synch their watches, then start running side by side, their footfalls creating a pastiche of hypnotic rhythms.

This is one of those albums that seems to open a new door, previously unseen, with each successive listen.  That makes for a fascinating listening experience.

And I’ll tell you so you don’t have to look it up yourself:  The trio is named after Antoine Busnoys, a French composer and poet of the early Renaissance Burgundian School, noted as a composer of sacred music, such as motets, and also one of the most renowned 15th-century composers of secular chansons.  While I would love to take credit for this information, it’s more accurate to say that Wikipedia did the heavy lifting on that trivia.

Download a free album track from AllAboutJazz, courtesy of the artists.

You can stream the music, and purchase it, on the artist’s bandcamp page.

Wrestle Jazz – Legends of the Ring 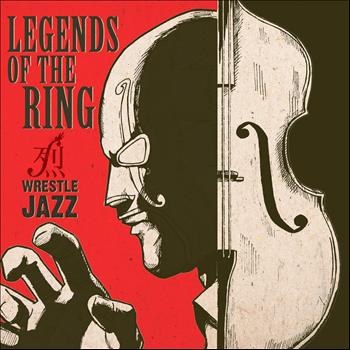 Wrestle Jazz is a project in which tunes originally used as theme songs for Japanese wrestlers have been re-arranged as compositions for a jazz piano trio.  And whereas the premise is a bit unusual, the music is anything but.  The music is undiluted jazz, very lively, and unwilling to let listeners catch their breath.  And the tunes are all kinds of catchy, though not at the expense of intricacy.  The music is fast and furious, complexity served up at a rapid pace… and yet still has the hooks to bait the ears.

There are some comparisons that could be drawn between this album and the Peanuts music of Vince Guaraldi.  They are both built around a theme associated with childhood, such as the Sunday funnies or Saturday morning wrestling, they both are light on their feet with endearing melodies and playful rhythms, and both in possession of a strong musicianship that the first two qualities could threaten to overshadow.  And, also, both are delightful additions to a music library.

It was recorded and produced in Japan, but the artists are based out of New York, so there are opportunities to catch live performances in the States.

It’s albums like this that keep me devoted to giving each and every new arrival a chance to connect with me, no matter what assumptions might be inferred before hitting the play button, no matter how huge the batch of new arrivals may be… little under-the-radar gems like Legends of the Ring make the time & energy investments worth it.

.  Worth noting that the eMusic version has an additional track that the Amazon (U.S.) version does not have.

Other Albums of Interest:

A new album from Butch Warren, the man who was the house bass player for Blue Note Records, and played on some of their seminal recordings. This a straight up bop album that swings with both heart and soul.  Warren brings a full ensemble with him for this date, including tenor man Buck Hill.

Artist site Link. Available on eMusic.  The album is Self-Produced.

Twopool is one of bassist Jonas Tauber’s projects.  Quartet of alto sax, trombone, drums, and cello for some serious avant-garde music.  Chaotic free jazz interspersed with sublime classical interludes.  If you need a dissonance fix, stop here and listen.

Download a free album track at AllAboutJazz, courtesy of the artist and label (Origin/OA2).

A saxophone trio’s musical reminiscence of a tour, by train, that took them across Europe and ended in North Korea.  Strong on the harmonies, true to the melody, more pretty than dissonant, more straight-forward than free.  Very accessible, quite alluring, and bonus points for field recordings of trains during an interlude.

Artist site Link.  Available on eMusic.  Released on the Music On The Edge label.

The Busnoys and Wrestle Jazz reviews are original to Bird is the Worm.  However, portions of the other reviews were originally used in my Jazz Picks weekly article for eMusic, so here’s some language protecting their rights as the one to hire me to write about new jazz arrivals to their site…

Daniel Freedman – “Bamako By Bus” The Wrap-Up: Using a liberal definition of the phrase “Bird is the Worm News”