These things come to me in the moment, and I write stuff down and in the deluge of music, that stuff gets forgotten and buried under stacks of lists and one-sheets and drafts.  But I thought it would be fun to map out where the Best of 2017 music was coming from.  I didn’t remember this great idea until, well, like just yesterday.  I cobbled this map together real quick: 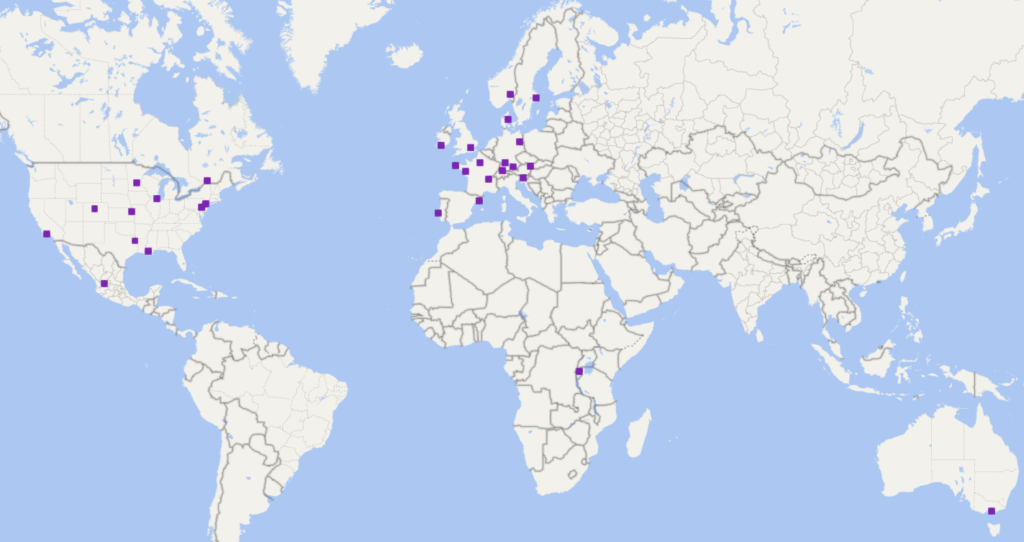 The purple dots represent the home turf of a musician whose album appeared in the Bird is the Worm Best of 2017.  If I’d been a bit more prepared, I’d have gotten those dots to scale in size based on total count of albums for that city.  For instance, the dot for New York City should be pretty damn large… something like 15 different albums could trace roots to Jazz Central.  And if I’m really badass, then I’ll get the map to represent every album I write about for this site (or other outlets)… which will really light that map up.

Another thing I’m gonna do next year is expand the definition of “home turf.”  As Vijay Iyer wisely pointed out during a twitter discussion, music that comes from New York City doesn’t necessarily reflect the breadth of the geographical influence upon the album.  For instance, I’ve got Diego Barber listed as repping NYC, but he hails from the Canary Islands.  Yazz Ahmed is tagged as London, but her Bahrain birthplace influences her music.  Fabian Almazan was born in Cuba and raised in Florida; does his time in New York dramatically affect his current sound?  Probably.  But does that mean it’s in the absence of places he’s previously set down roots?  No, probably not.  And what of the dramatic influence of Camila Meza on Almazan’s Alcanza?  Why shouldn’t we have a point on that map for her?  Guillermo Klein lives in upstate New York, and that relocation was critical in the Upstate Project album happening… but to ignore his Argentinean roots and not put a dot on South America is probably a misrepresentation of the diversity of the music hitting this site’s Top 50.  These are considerations that will go into next year’s map.  If I get started early on my data tables, and maintain them throughout the year, we could have a pretty cool map for 2018.

Let’s wrap up with some videos, because, hey, I don’t ever want to post something on this site where you aren’t able to hear some music.

Here’s a video from the Sandcatchers.  Their album What We Found Along the Way earned the #47 slot on the Best of 2017 list.

Next up is a video from the quartet MAP, whose Guerra e Paz received the #32 slot on the Best of 2017 list.

And let’s wrap up with a video from the Anne Quillier 6tet, whose album Dusty Shelters earned the #7 slot on the Best of 2017 list.