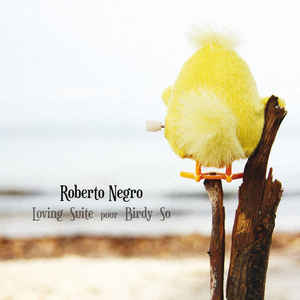 Art can speak to us.  Creativity is a method of communication.  The craft of various arts often has established lexicons, accepted foundations on which creativity can take shape.  It’s exciting and it’s a joy to hear musicians that present a mastery of their particular language by presenting it in a state of perfection.  Also true that it’s exciting and a joy to hear musicians present a mastery of their particular language by skillfully distorting the rules to present new visions of old vocabularies.  And then there are instances, like Roberto Negro‘s Loving Suite Pour Birdy So, where a new language is built from the ground up.  It is a moment of dramatic inspiration and resounding poetry.

The pianist doesn’t subscribe to any one particular school of music on this massively imaginative recording.  He walks a fine line between jazz and classical without ever stepping into the territory of either.  Vocalist Elise Caron imbues the words of Xavier Machault with a liveliness and a resonance that every author wishes for.  Guitarist Federico Casagrande, who has displayed an envious trend at appearing on the most creative projects around, brings a searing heat to the recording, but even those moments when Negro unleashes him on a song, Casagrande delivers his part with a masterful precision that gives a satisfying sense of form and shape to even those moments of unbridled ferocity.

The bass of Nicolas Bianco isn’t one that gets much separation from the rest of the pack, and yet there are times that his contribution can be felt like the disconcerting, profound rumble of the tiniest earthquakes felt just below the surface of things.  The violin and cello of Theo and Valentin Ceccaldi offers up beautiful harmonies of heartbreaking proportions and the most delicate expressions of melodic intent.

The songs each have their individuality, yet are strongly tethered to one another via a shift into a familiar tempo or the referential accents on Caron’s vocal cadence.  Common fragments of melody pop up at delightful moments.  The album builds a familiarity across the breadth of the songlist, and on an album that is so very different in what it is presenting, that is a quality that can’t be esteemed too heavily.

The urgency of “Tout de toi” yields the prettiest wind-downs of intensity with swells of string harmonies, whereas “Champagne,” drenched in a rising tide of strings and percussion, never turns back.  Retaining the stately elegance of classical music, it matches the Velvet Underground’s terrific surge of rock ‘n roll intensity on “Heroin.”  And then there’s “”Comme un livre d’Erri de Luca,” which blends the two of these approaches to intensity, building oh so slowly that it doesn’t even seem like a build until a certain elevation is attained and the rush of perspective is as thrilling as the music itself.

Caron’s vocal delivery has a persistent edginess to it, even as it comforts the ears.  The acrobatics of “Bal(l)ade volée de Birdy So” has her paired with strings, and transitioning from concentric loops of melody to rhythmic lateral scrambling.  “Bicyclette” is her personification of sunlight flitting through the cool shade of wavering leaves.

The refracted melody and hint of dissonance on “M’avez-vous dit vous?” and the odd groove of “Pivoine Shichifukujin” provide horizon lines of perspective to an album that trades in singular visions.  This is further evidenced by “Toi, moi, oie,” which begins as lullaby before waking up to dance as folk song.  There is a sense of dream to this entire recording.

An album of massive imagination, and that it can also be so simple to engage is just more proof of the masterful touch applied to this thrilling album.

The Something Different review series highlights albums that are unlike anything else, and which embrace the best qualities of creative vision.