The Round-up: When the world removed its mask, life and memory became as one 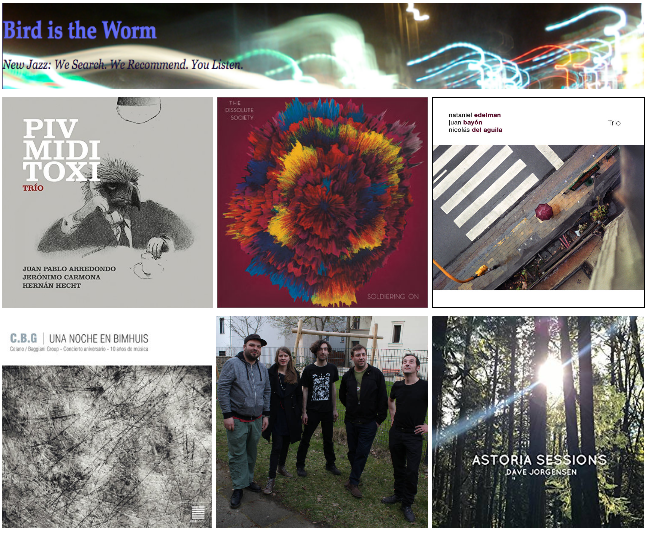 This trio session from guitarist Juan Pablo Arredondo, bassist Jerónimo Carmona and drummer Hernán Hecht isn’t afraid to flex some muscle to get its point across.  They snap off melodies with the same speed that spurs on their tempos, and both have moments punctuated with bursts of controlled fury.  But just beneath the surface, there’s a tunefulness that borders on catchy and a groove that seems determined to get the foot tapping.  It’s a quality less hidden when the trio slows things down and lets the music breathe, and it’s difficult to say exactly which form of expression represents the trio in the strongest light, because both instances see the music burning bright.  A nifty recording from the Buenos Aires scene.

What’s best described as a theatrical production, this wild session led by trombonist Raph Clarkson possesses a narrative script and a fearlessness to diverge from it at will.  Sung vocals, spoken word, a large ensemble jazz roar, and a chamber jazz deep introspection all play a part in this sprawling work that features a string trio, trumpeter Laura Jurd, and vocalist Fini Bearman among its numbers.  It’s a pretty thrilling album in its own right, but considering this is a debut, it makes it just that much more promising.  This is just one of those unconventional albums where stringing together descriptive words falls far short of the value from just hitting the play button and listening straight through to the album’s final note.

Nice bop trio set from pianist Nataniel Edelman, bassist Juan Bayón and drummer Nicolás del Aguila.  Featuring compositions by Parker, Ellington, and Sonny Rollins, the trio plays it straight.  Nothing fancy, nothing groundbreaking, just solid jazz at its most familiar.  The album ends on an upbeat note with a nifty rendition of Lou Donaldson’s “Cookin’.”  It, as much as any tune on this recording, signifies what this album is all about.  It’s also another nice example of the wonderful diversity of jazz coming from the Buenos Aires scene.

There’s an appealing casualness to this live session led by guitarist Guillermo Celano and drummer Marcos Baggiani.  Melodies are drawled out slowly and tempos seem haphazardly constructed.  The result is unmitigated personality.  Songs often reveal traits not immediately hinted at, and the initial direction a tune takes is rarely the same it ends with.  This live set at Amsterdam’s famed Bimhuis is free and unbound and strangely tuneful when least you’d expect it.  Rounding out the CBG sextet are multi-reedists Michael Moore & Joachim Badenhorst, tenor saxophonist Natalio Sued and bassist Clemens van der Feen.  And yet more music from the Buenos Aires scene.

Likable free jazz session from saxophonist Pacho Davila & Mia Dyberg, drummer Marcello Busato, bassist Adam Woodwin, pianist Anette Wizisler and trumpeter Nils Ericson.  This music is the equivalent of a crowded room dashing about in a mad panic.  That said, each piece throws out a melodic fragment like a life ring to a drowning listener, and the ensemble returns to it frequently enough to ride out the song.  Loose and fun, this music’s enthusiasm becomes pretty embraceable as the album becomes more familiar.  Worth noting I have reason to believe this ensemble might go by the name Berlin Free Jazz Kollektiv.

Dave Jorgensen, a trumpeter by trade but multi-instrumentalist at will, recorded all of the instruments (aside from Luke Ydsti on upright bass) on this one-man show. The melodies are catchy as hell, and the rhythmic accompaniment lives to serve those melodies. I just found this album rather charming and wanted to give it a quick mention.