Two For the End of the Night: Gabriela – “El Viaje” and “Detras del Sol”

I first discovered the music of Gabriela (who forgoes her last name of Marrone) via guitarist Bill Frisell.  Looking through his site, I checked out music for albums he collaborated on but didn’t have his name in the big typeface.  It was one of those internet wandering sessions, just following trails of breadcrumbs from one musician site to the next, listening to music, writing down names of albums and artists on lists, with ESPN on mute and the cats dozing nearby.  I’ve discovered a wonderful amount of wonderful music on nights like that.  The best finds, I’ve discovered, are the albums that not only pique my interest, but also fit the mood of the exact moment I’m in.

The atmospheric, lullaby sound of Gabriela’s music was the perfect fit for late at night.  Let’s talk about two of her albums… 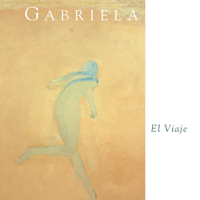 Born in Argentina, and now living there again, Gabriela has been exposed to the music of many geographies.  The daughter of a diplomat, she lived in several countries throughout Europe.  And later, as an adult and traveling musician, she moved around some more, spending time in the U.S. and Europe again.  The exposure to such a diverse array of music sounds to have freed her from any one influence, even that of her native Argentina, for though her music does possess a South American flavor, Gabriela’s personal sound isn’t beholden to it.  It’s that shrouding of music lineage that imbues her music with a sense of mystery and individuality.

Collaborating with Bill Frisell, Tucker Martine, and Lee Townsend couldn’t have hurt either.

The melting pot of electric and acoustic guitars and loops, with additional strings via viola, violin, and bass, afford this music, atmospheric at heart, a thickness, like fog over the harbor, and that corporeality makes this music as much of the earth as the air.  It means that this will get felt in the gut, even as its beauty lifts hearts up to the sky.

Gabriela has a vocal approach that isn’t afraid to accentuate words with a theatrical flair without it ever getting hammy.  Opening track “La Furia” has a waltz sway to it, and it’s not an uncommon sensation throughout the album.  Some tracks, like “Quedate,” float on a sea of guitar loops, words only buoys rocking back and forth against the ebb and flow.  The stronger tunes, however, have an insistent tempo on guitar and a quivering tension, like “Alguien Grita, Nadie Escucha” with its ominous undercurrent that inspires wariness and “Romance,” which is far slower in tempo, but even the thick blanket of violin can’t usher away the chillier guitar tone.

But in the ways that matter most, the tension is an attractive feature, and the prevailing trait is one of ethereal beauty.  And it’s perfect for sitting up late at night, when it’s just the music and the listener, with no distractions to get between the two.

As far as I can tell, this is Gabriela’s latest recording.

Released in 2006 on the Songline / Tonefield label.  Released in Europe on the Intuition Music label.

You can stream three album tracks HERE, on the Songline site. 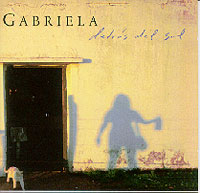 Recorded approximately ten years before El Viaje, there is still a remarkable amount of consistency between that album and Detras del Sol.  This is in no small way due to the presence of Bill Frisell on both recordings, not to mention Lee Townsend‘s touch in the role as producer.  But if anything has proven true over the course of ten years and three albums (the recording Viente Rojo falls in between the two covered in this article) is that Gabriela has spent a career developing her unique sound and creative voice, and once found, that’s something that sticks.  And it should.  All of us, as creative people, should search for our unique voice, and once we find it, trust in it.

While possessing many of the ethereal qualities that made El Viaje so delectable, Detras del Sol has an earthier sound to it.  More akin to Gabriela’s take on folk music and channeled through her unique sound.  Frisell’s guitar doesn’t take flight nearly as much as on El Viaje, instead keeping close to the soil a la his own recording This Land (which was released just a couple years earlier), an album that had him delving heavily into an Americana dialect of Jazz music.  Another difference in sound should be attributed to Rob Burger‘s inclusion of accordion and harmonium, which both have a from-the-dirt demeanor to their sound.  Also, Bill Douglass is on bass for this recording.  Viktor Krauss, the bassist on El Viaje, has a sound far more suited to taking to the air.  Now, from a big picture perspective, both Krauss and Douglass have cut their teeth in the World/Folk-Jazz subgenre, with Krauss’s sound a bit more modern and Douglass’s a bit more old-school (think: ECM).  But on this recording, Douglass’s bass lines sound like they’re rolling over hills, and the addition of his ocarina, this was the right choice to have him on this recording. 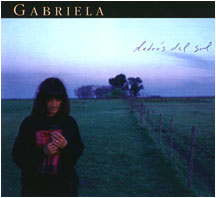 On Detras del Sol, Gabriela’s vocals are more song-like, and constructed as straight-ahead tunes (as opposed to El Viaje, where she was more inclined to expressions of words).  It works better for the music on this album, and the use of a bit of restraint with the inflections doesn’t make her voice any less compelling.  The match between her deeper voice and accordion is a delight.  Alex Acuna‘s percussion fits the album’s sound to a tee, with no better example of this than the chipper “Hermana Maria.”  Eyvind Kang‘s violin isn’t as prominent here as it is on El Viaje, but tracks like “Duerme” will give the listener their necessary fix.

Speaking of “Duerme,” it closes out the album, and, perhaps not coincidentally, it has much of the hazy atmosphere of El Viaje.  A hint of things that were to come.

Released in 1997 on the Songline / Tonefield label.  Released in Europe on the Intuition Music label.

You can stream two album tracks HERE, on the Songline site.