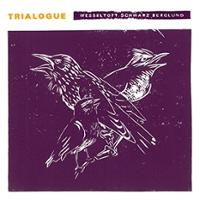 The most compelling characteristic of Trialogue, the trio effort of pianist Bugge Wesseltoft, bassist Dan Berglund and computer whiz Henrik Schwarz, is the way in which the prevalent elements of melodic contemplation and rhythmic ebullience feed off one another.  There is a back and forth between the two elements that never allows them to unite at any one moment, and the resulting conflict between the two creates all kinds of tension and imagery to keep the ear riveted.

“Valiant” is the first to delve into those qualities.  The quavering bass arco opening is swept up by the occasional melodic flourishes of piano.  When the tempo finally unfolds, it possesses a slow, almost ponderous gait that does as much to accentuate the atmospherics as it does the shape of the song.

The jaunty cadence of “Headbanger Polka” is instilled with the melody’s sense of urgency, and conversely, the melody adopts a bit of the rhythm’s joyful bounce.  Similarly, “Take a Quick Break” is a matter of shared propulsion.

“Movement 11” continues the symbiosis of urgent melodies and cheerful tempos, but given new life with huge washes of harmony from guest bass trombonist James Kent and a string trio from the Orchestre Philharmonique du Luxembourg.  Its counterpart, “Movement Seventeen,” swings in the opposite direction, with tranquility and a coasting tempo ruling the day.

However, the roots of this collaboration extend further back to Wesseltoft’s and Shwartz’s exploration of the places where a Nordic-style jazz serenity come together with highly-charged electronic music.  And so while the album’s final two songs give the impression of a movie that goes in an entirely new and unexpected direction for its conclusion, it’s really not that huge of a surprise.

The first of the album’s final two songs is the electric groove & effects of “This Is My Day.”  It continues the album trend of toying with tempo and slippery cadences, and its use of voice sampling and a near-contemporary jazz sheen present a song that is nothing like anything that preceded it.  The album concludes with a similar approach but a different sound with an intriguing electro-acoustic take on Monk’s “Round Midnight.”  It makes for a more satisfying diversion than “This Is My Day,” which really puts a dent in the album’s cohesion.  Even the album’s opening track, “Interlude,” with its electric fuzziness and hazy atmospherics keeps beneath the album’s enfolding canopy.

But this is a small criticism of an album that provides all types of reasons to dive right in and enjoy.

Released in 2014 by Jazzland Recordings.