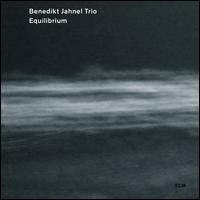 I’m a sucker for moody piano trios.  They make the perfect soundtrack for a slow wake to an early morning.  The best ones refrain from any sudden moves that might accelerate my pace, and keep volume and tempo at a level that matches the effect of coffee and Irish cream on my nervous system.  But they also possess sonic blips, often going undetected, that coax my brain into action.  An album like that can give me all kinds of mileage as a First Album Of the Morning.

The Benedikt Jahnel Trio‘s new album Equilibrium is looking to be the newest in a proud lineage of albums that remain right near my stereo for those times when the sun is showing signs of climbing out of bed.

This is an album that often leads with simmering tension, and either keeps it leashed or lets some steam rise up from the surface.  Album opener “Gently Understood” begins like a ticking time bomb, and, thankfully, the trio recognizes that the build-up is more evocative than any cheap explosions.  Howard provides the strongest moments for this track as it fades out with rhythms that crackle and spark.

That leads to the placid “Sacred Silence.”  A gentle ballad that murmurs and coos and dreams of one day becoming a lullaby.

“Moorland & Hill Land” is arguably the most adventurous track on the album.  It begins with sparse notes that quiver and rattle.  After several minutes, the trio coalesces back into a cohesive unit.  This leads to an absolutely lovely piano solo by Jahnel that is as uplifting as the opening section was foreboding.  The emotional shift within the confines of this tune is exactly the kind of subtle tweaking that goes a long way for me when it comes to a morning album.  I could just drift away to this music.  When the solo ends, the trio coalesces with the same seamless perfection with which they engaged after the song opening.  The track has a superb driving cadence that breaks only for some astounding bass solo resonance by Miguel, who rejoins the trio just as the song ends.

“Augmented” and “Hidden Beauty” keep to the course, elegantly restrained piano-led songs which counterbalance tracks that stray from the normal, like “Wrangel,” with Miguel’s wavering arco bass and Jahnel’s oblique phrases creating a moody tone and setting the table for the trio to launch into higher tempos.

The album ends with the title track.  Apropos of all that led up to this point, it’s a quiet tune that picks its way deliberately across the span of the song.  It has a light touch and a meandering path, and Jahnel sticks to the direction he first sets out on.  The song has a pleasant looseness to it.  It is, truly, the kind of pace one should aspire to wake slowly and pleasantly to.

I’m very taken with this recording, and I expect it will accompany many sunrises in the months to come.

Released on the ECM Records label.

As an aside… It’s the trio’s first album for ECM, but it’s not Jahnel’s first experience with the label.  He’s a member of Cymin Samawatie’s Persian folk-jazz outfit Cyminology.

Jazz from the Cologne, Germany scene.

Another aside… speaking of First Album of the Morning albums… Marcin Wasilewski Trio’s January last over a year as a regular play to start my day.  There’s a good chance that Equilibrium will live up the standard set by Wasilewski’s excellent recording.

My new Jazz Picks are up at eMusic Andrés Þór – “Mónókróm”