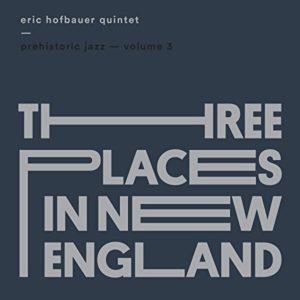 Prehistoric Jazz Vol.3: Three Places in New England should probably be my album of the year.  I always struggle with the decision.  Typically it’s a toss-up between my top two albums, but this year, the real contenders are doubled.  Even now, as I type this, I’m tempted to tinker with the order of things.  Eric Hofbauer‘s reinterpretation of Charles Ives’ “Three Places in New England” has all the inventive melodic shaping, toying with tempo, and tonal shifts between edgy dissonance and cerebral post-bop that one would expect from a work crafted in the modern jazz environment.  But Hofbauer’s quintet frames it in the context of the source material, and the whimsical bursts of martial candences, introspective takes on down-home folk, and classical music passages intentionally warped and blurred and deconstructed infuse the album with a dual personality that is seriously intriguing.  What brings out the fullness of those two sides, uniting past and present, is that the blues informs every bit of motion and melody… even when it comes out sounding anything but traditional.  It’s a seriously impressive feat to create cutting-edge music that puts its tangled roots front and center, but for Hofbauer’s quintet, this isn’t a new thing.  The third installment of Hofbauer’s Prehistoric Jazz series is the most impressive yet… which is a considerable accomplishment when viewed in the context that the first two volumes were amazing in their own right.  Joining the guitarist are trumpeter Jerry Sabatini, clarinetist Todd Brunel, cellist Junko Fujiwara, and drummer-percussionist Curt Newton.

Read more about the album with my Best of Bandcamp Jazz column on The Bandcamp Daily (LINK).