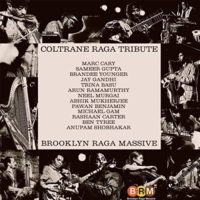 This music is emotionally uplifting.  This music is whip-smart.  Exploring the connections between Indian music and the works of John and Alice Coltrane, the Brooklyn Raga Massive doesn’t obscure its ties to their inspiration, and still finds a myriad of ways to make this music sound all brand new and different.  Their 2017 release Coltrane Raga Tribute elicits the complexities of John’s and Alice’s works without scrounging on the joy and intensity that drove it.  And so it’s just as easy to immerse oneself in contemplation on “Africa” as it is to do a little dance around the room as it bursts from the speakers.  The effect is much the same on “Journey in Satchidananda,” where the avenues to deep contemplation are just as plentiful as those that lead to a compulsion for motion.  Everything about this album is wonderful, and it sets a gold standard for reinterpreting the classic songs of the past.  This easily could’ve been the album of the year.