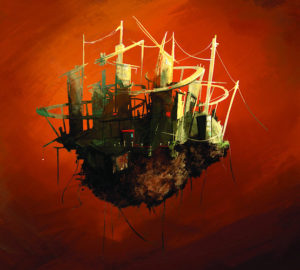 The very first recommendation of the very first column I wrote in 2017 for The Bandcamp Daily stated It’s too early in the year to be saying things like “this is the best thing I’ve heard all year”… but this is the best thing I’ve heard all year.  The album I was speaking of was Dusty Shelters by the Anne Quillier 6tet.  And as we crawl to the final days of 2017, it turns out that it was true all along.  This album is one of the very best things I’ve heard all year.  There’s a poetry to the way each piece reveals itself, and the path is marked by all kinds of little surprises and colorful displays of lyricism.  There’s an electricity to this music that’s as charged as the blood coursing through our veins, a subtle nod to the life-affirming power of music and the unabashed joy of creating it.  2017 was a very strong year for the modern jazz scene.  Dusty Shelters has been Exhibit A all year long.