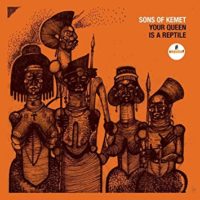 No matter how you look at this album, you’ll see a statement.  There’s the political context, of the idea of royalty and the fracture of racism cutting down the center of society.  There’s the media context, and of who is presented to the public as role models and heroes.  There’s the musical context, of the roots of folk music stretching across continents, of cross-pollination of influences, and of musicians stamping their mark on the present day scene.  But in ascendance over all of those, the statement that rings most clear, is that a heavy message need not clip the wings of music that simply wants to go soaring.  There is an unmissable sense of importance that radiates from every note of Sons of Kemet‘s Your Queen Is A Reptile; so are its expressions of joy.