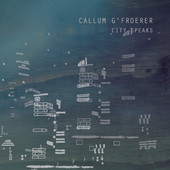 It’s how City Speaks doesn’t seem quite finished that registers as its most appealing quality… that the grand idea visualized in its conception came so very close to materializing, but fell just short.  This could be considered a flaw.  But the thing about flaws is that, often, they are responsible for some of the more intriguing outcomes.  That happens, here, on the debut album by trumpeter Callum G’Froerer.  There are times when City Speaks gives the impression of moving off in an entirely different direction, one which transcends genre and hints at something quite new, something quite different.

Songs like “Virginia” and the title-track “City Speaks” present the most lovely shimmering guitar accompaniment to gentle surges of skittering rhythm as the low moans and high sighs of trumpet and sax coexist in a tenuous state of harmony.  These tracks have a striking allure, and they give the sense that they could undergo a metamorphosis at any moment, becoming something comfortingly familiar or something wondrously alien.

And then there are tracks that are more conventional.  “Silver Platter” is a mid-tempo post-bop tune, a vehicle for trumpet to do its thing.  Guitar switches to a more traditional role, and like trumpet before it, solos in the range from sedate missives to fiery proclamations.  There are a few bass solos of note, too, but mostly it, along with drums, keeps the soloists tethered to the group dynamic.  “The Thinker” is a bit more punchy than its counterparts, which let thoughts linger in the air, whereas “Sweetness x3” sits at the edge of combustion.  A slow tune with a slow burn, yet this ballad suggests that it could ignite into a firestorm with a snap of the fingers.

There’s nothing wrong with the conventional tracks.  In fact, they deliver plenty of wonderful passages.  But after that very different, very attractive opening track, the subsequent conventional tracks don’t seem quite to pick up where it left off.  But they also don’t stray too far away, so that when the gripping interlude “Trio” arrives, with its fluttering of sax and trumpet and its high pitched atmospherics, it doesn’t at all sound out of place or jarring in the flow of one song to the next.

The glue that binds the album together is “Gemmani.”  A trumpet ballad that bends like moonlight, it bridges the divide between the traditional and unconventional album tracks.  When the song bubbles to life with a flurry of activity, there’s no doubt that it will return to a peaceful state.  And it does.  The trumpet section sounds like it would be right at home in your everyday modern jazz piece, but the way in which the group swells up and coalesces around the trumpet solo provides it a context that is most certainly not an everyday modern jazz piece.

And it’s that push and pull between what-could-be and what-almost-was that makes City Speaks a compelling listen.  It’s what keeps bringing me back to this album over and over and has me interested to hear what comes next.  That this was a debut recording is all kinds of promising

Released in 2013 on the Listen/Hear Collective.

Jazz from the Melbourne, Australia scene.

A few other notes:

There are two bonus tracks.  Kynan Tan re-mixes the title-track, and it works pretty well as the album’s “final” track.  While I’m as interested as the next person to hear other people re-mix cool songs, I really hate when they get tacked onto the end of a proper recording.  Re-mixes are the kind of thing that Soundcloud was made for.  That said, Tan’s remix of “City Speaks” is a rare exception and works remarkably well in tandem with the rest of the album.

There’s an additional bonus track “Rocky Mountain” that is provided in download form if you buy the CD through the label’s Bandcamp page.  As of the time of this writing, I haven’t yet heard it, so, obviously, no opinion provided.  If that changes at some point, I’ll update this review.

Recommended: Ambrose Akinmusire – “The Imagined Savior Is Far Easier to Paint” My new eMusic Jazz Picks are up at Wondering Sound