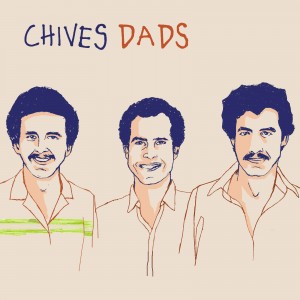 These are squirrely tunes.  Just when it seems like you’ve got a melody in your grasp, it wriggles out and runs off in an unexpected direction, and just when it seems like the ear has caught up to the trio, they take off at some uneven and bewildering pace.  These are compositions that shade toward catchy, but improvise their way out of that room.  These are songs that can’t sit still.  Even when they edge cautiously along, an abounding energy emanates from the music.

This is the music of the Chives.  Their latest album is titled Dads.

A trio consisting of childhood friends, they clearly have a creative symbiosis earned through time.  Multi-reedist Steven Lugerner first made his mark by debuting with a double-album release, Narratives and These Are The Words, both getting a mention in the Bird is the Worm’s Best of 2011 wrap-up series.  Notable was Lugerner’s thematic approach of using the Torah both as inspiration and as a mathematical tool for composition.  Drummer Max Jaffe has branched out into projects that range from experimental folk to chamber rock and theater.  And bassist Matthew Wohl has situated himself behind a vocal jazz quartet as well as a collaborative project focusing on the music of John Cage.  They each have their influences and their own personal music directions, and, at times, those influences peek out from this trio’s sound.  But ultimately, their familiarity is stronger than that which informs their personal music paths, and it’s why Dads is preeminently cohesive and of one voice.

It’s a voice that keeps up a hell of a chatter, but it positively has something worth hearing.

Released on the Primary Records label.

You can stream, and purchase, the album on the artist’s Bandcamp page.