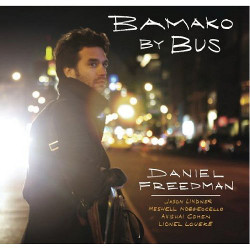 The title for drummer Daniel Freedman‘s expansive music vision came about on extensive bus ride through Mali, which was just one leg of his journeys through West Africa, the Middle East, and Cuba. He brought back with him to NYC more than just photos and souvenirs… the various regional musics came, too. And it was the coalescence of those sounds that inspired him originally to name this album NY Nation, because, as Freedman states, “[the music] from all over the world, it could only have come together here.” Here, in this instance, is New York City, a place of vast diversity, and arguably the center of the universe for Jazz, a music which is as diverse and as populated by music influences as the city Freedman calls home.

The album is built around a quintet of drums, trumpet, guitar, bass, and keyboards, but Freedman adds textures as if drawing a map.

Though just a two minute intro, but opening track “Odudua” gives a decent peek at this album’s disparate elements. Latin rhythms and soulful vocals, it flirts with a Caribbean groove before transitioning to a rustic folk. And like the urban landscape suddenly changing the view from any major metropolis street corner, the second track leads into a West African tune, with Loueke’s spoken word chant, Cohen’s trumpet calling out over the top of a percussive flurry of congas, drums, and chekere.

The scene shifts again for “Deep Brooklyn” and its thick R&B groove. Lindner’s keys develop the tune’s casual strut while Cohen flexes on trumpet. Freedman provides the song with sharp teeth. And after the thick Latin percussion and chanting of “Rumba Pa’ NYC”, which explodes with life as piano and more voices join in, Cohen’s trumpet rising up out of the crowd, the sound transitions on the next track to a late night jazz club for “Alona”. Turner lets his tenor sax sing a wistful ballad. Linder and Cohen accompany on piano and trumpet, but their tones display an unwillingness to alter the moody atmosphere.

But if there’s anything the album does consistently is, in fact, change. “Sa’aba” is a modern piece, with melodic ambient interludes, dynamic percussion that drives the tune into rock territory, spurred on by the lit match of Turner’s sax and Cohen’s cut-and-run trumpet lines. The album ends with the title track. A bouncing tune of plucked strings and the pleasant repetition of piano notes like gurgling of a stream. A subdued vocal chant falls easily into the flow of the tune.

It’s an album that takes an impressive stab at realizing a grand scope, of encapsulating a sense of his travels and his home city into the length of a single album. The result should be considered a success.

Released on the Anzic Records label.

You can stream, and purchase, the album on the artist’s bandcamp page.