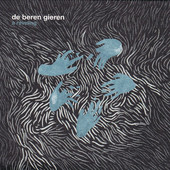 Tumbling down a flight of stairs is not an action one takes willingly, and yet the sudden changes in tempo performed at a high rate of speed by the piano trio De Beren Gieren seem to indicate the kind of personality that might not shrink from that risky combination of ground and gravity.  The heart of A Raveling, the trio’s third album, is rooted in the rhythm, switching up cadences without notice, and with an awkward fluidity that adds to the music’s charm.  An album of choppy motions and rough transitions that never fit plumb together, it’s music that keeps the listener on their toes and locked in tight.

And while most tracks are up-tempo, some tunes like “The Detour Fish,” which shifts from a murmur to a growl, and the bluesy stroll of “Sitting on a Fence” establish a pace that respects the need for a little diversity over the course of an album.  There’s also those occasional moments of melodic suffusion, like the delightful pairing of gently cooing piano and the purr of bass arco on “Broensgebuzze VI” and the blissful conflagration of “Ontdekking van Materie,” and these brief flourishes accentuate the album’s rougher edges and provide them an extra boost of personality.

A charming album from a piano trio that does their thing just a little bit differently.

The album is Self-Produced, and released on Igloo Circle, which appears to the trio’s own label.