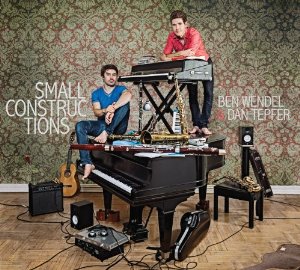 Renting studio space for a couple days, Dan Tepfer and Ben Wendel brought in an array of instruments and their own recording equipment, and created the sublime Small Constructions.  Even with employing some recording techniques that allow them to layer multiple parts atop one another, there still persists an economy of sound that allows room for ideas to hang in the air before the next round of expressions commences.

Some of that is attributable to the environment of a duo collaboration, especially one between piano and reeds… a pairing that has a distinguished line of albums as evidence of the rewards this particular match can generate.  But mostly the direction to look in is the musicians themselves.  Wendell has proven his versatility and collaborative ease in a variety of settings that sit on the fringes of Jazz, whether his participation in the jazz-rock outfit Kneebody, his contribution to Indie-jazz ensemble Todd Sickafoose’s Tiny Resistors, or genre-obliterating work with artists like electronica DJ Daedelus.  Tepfer excels in trio & duo environments, and his background in classical seems to lend a quirky elegance to his jazz performances.  Also, his blog reflects an artist who relishes the act of delving into the theory of his craft, and talking about it in a way that holds an attraction even to non-musicians (check out his recent post on the SuperCollidor and rhythm becoming pitch).

So, yeah, put these two in a studio for a couple days with some instruments and recording toys, and something special is gonna come out of it.  The ‘it,’ in this instance, is Small Constructions.

Opening track “Still Play” is representative of the demeanor of several songs on this album.  A tune with a surging tempo that borders on mesmerizing.  In this example, the propulsion originates with Tepfer on piano, but Wendel’s sax adds an additional push forward in space.  What ensues is a series of seamless transitions, a unison achieved that makes their flight appear even swifter, and more graceful, too.

Especially notable are their renditions of two Thelonious Monk compositions.  First up is second track “Pannonica.”  The duo finds the commonalities between their own idiosyncratic approach to this album and Monk’s free-spirited eccentricities on the original composition.  The duo’s version is spritely and contemplative both… as so much of Monk’s music is… engaging both heart and head, inciting brain synapses to spark and the foot to tap.  The staggering beauty of autumn leaves whipping about in a swift breeze.  And their rendition of “Ask Me Now” captures the way Monk could speak the blues with a devastating sadness even as his piano radiated a sunny disposition.

Third track “Jean and Renatta” brings on a contemplative tone.  Wendel with long slow notes on sax, Tepfer taking small steps, a persistent evoking of the quiet nobility of a waltz.  Such a pretty tune.

And at this point, it’s a good time to highlight one of this album’s best attributes… the ability of the musicians to switch between emotional charges and intellectual expressions in a thoughtful, yet daring way.  The first three album songs sound nothing like one another, yet they possess a cohesion which signifies, without a whisper of a doubt, that they belong to the same recording session, the same creative expression… all the while, the exact nature of how those creative thoughts are actually expressed is varied and unexpected.  It’s a way to keep the listener guessing while also providing a reassuring confidence that the artists aren’t just wandering blindly through a series of unmapped compositions and haphazard improvisations.  It all makes sense.

They also perform a rendition of Lennie Tristano’s “Line Up.”  Tepfer’s Fender Rhodes prances along on a happy jaunt.  Wendel matches the pace on sax, shadows it step for step, even when it takes the lead.  The song has a dreamy sense of time.  The fluttering breakdown of this track is outstanding.  Later, they also perform the classic “Darn that Dream.”  Frail. Smokey. Wispish.

“Nines” is a nifty, slow build of repetition and pattern play, and “Rygabag” is a boozy tune, a staggered blues with a theatrical flair.

Their rendition of Handel’s “Variation 1 in D minor” is arguably the album’s shining moment.  A stunning beauty with a disconnected presence.  Wendell records parts on sax and bassoon, and Tepfer records on piano over the top.  The effect is a dynamic tapestry of sound, but with instruments and musicians sounding detached from one another… a coherent conversation, but from opposite ends of the room and their backs turned to one another.  Sax is solemn, piano is a chatterbox, yet somehow it fits together so beautifully.  A seriously engaging tune that speaks mostly to the heart.

And really, that last statement might be the best way to sum up the entirety of Small Constructions.  The title alludes to acts of crafting and engineering, of utilizing learned skills and absorbed theory… and yet the end result is evocative music more likely to connect at an emotional level.  And if further evidence of this claim is required, the duo provides it with the album’s closing track “Oblique Strategy.”  For this tune, the musicians switch instruments… Wendel on piano and Tepfer on sax.  It’s a simple song with simple statements, and serves as a perfect send-off, representative of the beating heart behind all of the composition and recording machinations preceding it.  Performing on instruments that aren’t their first line of defense, they create with all heart.

Released on the Sunnyside Records label.