I remember the first time I heard the Codona trio.  I was at Jerry’s Record Exchange, flipping through the CD racks, and noticed the album cover for Codona III.  I was very familiar with Don Cherry’s name, but Collin Walcott and Nana Vasconcelos… not so much.  I hadn’t really delved much into the ECM catalog at this point (of which this album was released on), and so wasn’t sure what to expect from these musicians or this release.  My experience with Cherry was his avant-garde music on Blue Note and his work with John Coltrane.  It didn’t prepare for the organic beauty of Codona.

An early example of what is generally referred to as World Jazz, Codona released three albums of stunning, devastatingly beautiful music that is terrifically engaging with its use of instrumentation and adoption of various regional musics.  Jazz and folk and ambient… music to just drift off to, but never threatens to become sleepy or insubstantial.  It featured albums like trumpet, sitar, tabla, organ, berimbau, sanza, dulcimer, chanting, and a variety of other stringed and percussive instruments.  Texture after texture, waves of unexpected eccentricities.  Just beautiful. 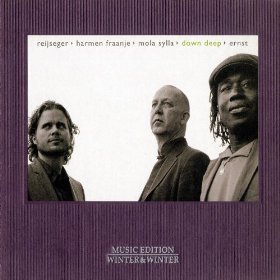 Which brings me to Down Deep, the recording by the trio of Ernst Reijseger, Harmen Fraanje, and Mola Sylla.  Bringing together inventive combinations of unusual instruments, and blending different music influences into a singular sound, the trio has created a magical album of sublime beauty.  And, damn, it takes me back to that fortuitous day in Denver, Colorado, when I discovered Codona III, and the type of Jazz that ignores conventions and genre demarcations in the pursuit of creative music.

Atmospheric only describes one element of this music.  It possesses a lightness that keeps it hovering just above the ground.  It’s also a music in motion, though rarely traveling very far to exert it.  Fraanje’s piano often runs in tight circles, developing melodies with a methodical precision.  Sylla brings a rustic character to the music, whether plucking at the tinny m’bira or the soothing xalam.  The elegance provided by Reijseger’s cello is exceeded only by its warm tone.  Sylla’s vocals range between a folksy chant and a plaintive cry to the heavens.

Most tunes have an ambling cadence.  There is a sense of music developing at just the right speed, the musicians guiding the song as the song, concurrently, guides them.  Sometimes the music prowls, sometimes it glides, but always with a casual demeanor that incites only blissful moments.

One of the most beautiful albums I’ve heard so far in 2013.

Released on the Winter & Winter label.

Open Letter: Pitching an Album Review Request My new Jazz Picks are up at eMusic