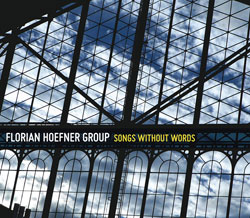 Of the hundreds of albums I’ve listened to in 2012, Florian Hoefner‘s Songs Without Words possibly excels best at offering lovely melodies made memorable.  These are not simple tunes, but they are simply presented.

There is a congeniality to this album akin to pop music, and the melodies are infectious as hell, but they are anything but sweetness and light.  In fact, in the middle of all this pop music buoyancy, the melodies have a note of sadness, a suggestion of an emotional complexity that diffuses any potential to drift into pop music superficiality.

And this is still just the melodies I’m talking about. Falling in between is some wonderfully understated interplay. It’s one of my favorite albums of 2012.

I find it interesting that Hoefner opens this tuneful album with a free form section, perhaps something once recognizable but now deconstructed into the unfamiliar. Because this is an album that consists of songs… tunes with clear markers to light the path from first note to last, and rarely a tricky step along the way.  And even this opening is just momentary, as the excited banter between piano and bass and drums of “Cross Hill” quickly shifts into a clearer conversation.  And when Ruby steps in with a few sighing notes on sax, the album settles into the pace that will carry it through to the end.

It gets to where an ensemble earns the trust of the listener, that certain intentions stated early will be followed on through, and that patterns established early will be patterns honored later, too. And so it is with Songs Without Words, in that the listener can trust when sax or piano stretches out a bit, that the quartet will eventually return to the melody like a traveler returning home after a short journey. It’s a comforting sensation, and when the melodies are as strong as they are here, as a listener, it makes for a satisfying experience.

The opening piano chords on “Uncertain Times” is repeated on sax shortly thereafter, and both drums and bass hint at the melody’s rhythmic pattern throughout. The lovely sigh of contented happiness on “Distraction” isn’t a one-and-done; it’s reflected in every note, even when a little tension is introduced via tempo and tone. It’s also reflected in the album closer “Behind the Sun,” which has much of same blithe spirit as found on “Distraction.”

“Ankunft” has some delightful interplay between piano and drums. It doesn’t make the biggest splash on the tune (that designation would go to Ruby’s driving sax sections), but the subtle delivery of that piano-drum conversation is the winning moment on the track, not to mention reflective of the understated moments that bring a fullness to an album of heavy melodic focus.  Similar mention could be made about Anning’s interactions with each of the other three quartet members on “Song of the Past,” particularly by adding his poignant emphasis to sax sections.  And when it immediately leads into subsequent track “Distraction,” Anning offers a winning resonance to balance against Ruby’s darting notes on soprano.

The album ends with the catchy “Behind the Sun.”  A splendid choice as the album’s final word.  It repeats a few of the motifs of early melodies, recalling earlier tunes by way of wrapping things up.  But it’s the cadence of the song that clinches it.  “Behind the Sun” has a casual lope, the kind of pace one assumes when the race is all but over, the finish line is just a formality, and it’s okay to just enjoy the moment.

And that really speaks to my opening statement, that here is an album with, perhaps, the most substantive melodies collected on any one Jazz album in 2012, and yet possesses so much gold in its rhythmic territory and group dynamics that to engage it as simply an album with catchy tunes is to miss so much of what makes Songs Without Words a wonderful recording.

P.S.  I had forgotten that I had written something up about this album for eMusic, back when I made it one of my Jazz Picks many months ago when the album was first released.  Here’s an abbreviated section of what I wrote then, maybe after just a few listens…

This is one of those modern jazz recordings that, at first blush, seems like a straight-ahead affair. But then the melodies get dreamy and the rhythms sparkle and crack on the surface of the composition, and it just doesn’t do to call it straight ahead anymore. [Hoefner presents] a series of lighthearted tunes with enough moody substance to allow the emotional texture to shift at will. It makes for some deceptively simple music. When the soprano sax gets involved, things get so damn pretty.

After nine months and many many more listens to this wonderful album, I’m gratified to see that my little synopsis way back in May really reflected this music’s identity and depth.

Cheers.  (and thanks to eMusic for the right to reprint it here).