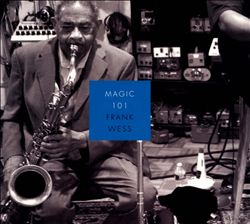 Wonderful classic jazz recording from jazz giant Frank Wess, who cut his teeth back in the day with the Count Basie Orchestra, then later contributed to a number of celebrated jazz recordings in collaboration with a hall of fame roster including Milt Jackson, John Coltrane, Yusef Lateef, and Hank , Thad, and Elvin Jones.

Recorded just shy of his 90th birthday, his newest album Magic 101 takes a stroll down Standards Avenue, and Wess plays those compositions with an exquisite touch and magnetic charm.  The challenge in recording a quality album of standards is to realize that the songs don’t, in fact, speak for themselves… the musician has the give those standards his or her own voice, and speak through them.  Wess does that to great effect.  Personally, I’m into jazz that stretches out to new sounds, new ideas, but when someone plays classic Jazz as lively and immaculately as Wess does here, I fall for the music hard and fast.  Listening to this album reminded me of what it was like when I was first getting into Jazz and marveled at the recordings of McCoy Tyner, Thelonious Monk, Red Garland, and so many others.

Wess gives Irving Berlin’s “Say It Isn’t So” a carefree swing that speaks fluently of the life-affirming beauty of an Autumn stroll, spurred on by Harper’s chipper drum work.  Wess follows that with a couple ballads, including one of his own compositions (the sole one on this recording) in “Pretty Lady,” which sways with a sultry presence.

“Come Rain or Shine” eases along at a casual clip, with Wess and Barron weaving together strands of notes on sax and piano, which playfully tweaks the sense of time.  Whereas Wess plays it clear as moonlight on “Easy Living,” the quartet offering up a sonic embodiment of a late night in city.

“Blue Monk” gets the tempo back up.  Wess embraces that song’s enchanting melody with love, and makes it shine with a vibrancy all his own.  Davis’s bass is light on its feet, adding to the composition’s ebullient bounce.  Barron leads the song out, and gets in a nice solo nearer to the heart of the song, but Wess makes his mark here, perhaps the shining moment of this wonderful recording.

The album ends with a solo rendition of Duke Ellington’s “All Too Soon.”  His exquisite sound and extreme talent carries him through, and his performance is a sublime affair.  There’s an intimacy, as if he were performing the song to each listener individually.  But those are the kinds of connections the greats are able to make.

It saddens me to pass on the news that Frank Wess passed away recently, on October 30th of this year (2013) at the age of 91.  I’ve seen mention made that there is a follow-up recording to be released in 2014.  He passed on all too soon, and as he proves on Magic 101, he still had so much more to say in music.

There is a very nice obituary written by musician Jérôme Sabbagh, posted on Peter Hum’s column.  Read, by following this LINK.

Portions of this review was originally used in my Jazz Picks weekly article for eMusic, so here’s some language protecting their rights to that reprinted material as the one to hire me to write about new jazz arrivals to their site…