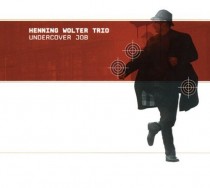 The new album by the Henning Wolter Trio is built around a concept that possesses more layers than one might initially assume.  An homage to the secret agents and locales of fiction (and those of real life and adapted for fiction), Wolter has dedicated each song to one such device, seeking to give an approximation of the person or place via jazz piano trio.  But this isn’t necessarily easy, as secret agents are meant to be deceptive, to remain unseen and unmeasurable… and the fictional ones do an even better than job than their reality-based counterparts.  Add to this, Wolter’s subtle approach to each subject, rendering face-value observation obsolete, and requiring that the listener go a little bit deeper to find the connections.

For instance, on the album track dedicated to Lawrence of Arabia (“Sensitive”), Wolter could’ve simply anchored his melody to that of Maurice Jarre‘s Academy Award winning soundtrack to the movie, but instead, Wolter’s trio offers up a contemplative movement to represent the shifting sands of the desert crossed by Lawrence, and, perhaps also, the nature of the character’s shifting allegiances.

The subject of “Hear the Signs” is the very real codebreaker Alan Turning and the very real Bletchey Park, both instrumental in the decryption of Germany code during WWII at the UK’s Government Code & Cypher School (and later referenced in a number of fictional works in popular media).  An up-tempo piece, Wolter’s trio begins with an identifiable melody that develops into increasingly complex statements and unexpected turns, before returning to a simpler, more refined version of the original.

Another real location referenced by an album track is Glienicke Bridge, which connected East and West Berlin, and where real-life spy exchanges were made during the Cold War (and later used in a John Le Carre novel).  The percussion is the sound of footfalls, and the arco bass like darkness enveloping piano’s moonlight, and yet aside from the potent imagery the music incites, the song is played pretty straight in terms of modern jazz fare… perhaps reflecting that, despite the bridge’s use as a device in popular culture, there is no obfuscating the grim reality surrounding the bridge’s use and how it symbolized the division of a country’s freedoms.

Also getting a mention is Ethan Hunt, the main character in the Mission Impossible movies, and completely absent from the cast on the original TV show.  “New Hero Nowhere” is a chipper rhythm and a grinning melody, strangely detached from the hyperactivity of the movies, yet symbolic of its casual disposition toward violence.  A darker tone peeks out from the tune at the song’s center, which builds into a frenetic pace before coming back to the happier tone from whence it began.  Later, on the “New Hero Nowhere (Reprise),” a bass arco opening leads into a brief tune that returns to the darker tones that the original rendition only hinted at.

The song “Supermarket” has Jason Bourne as its theme.  A tune with a driving cadence interspersed by postures of restraint.  The Bourne character has been reinvented many times depending on author and director.  Even in the original scribes of the character, the name was used by many different spies long after the namesake’s death in the jungles of Tam Quan.  The song has a linear shape to it, with the changes reflected through rhythm as if adjusting a heartbeat to blend with the environment.

Mata Hari, a real life exotic dancer who used her charms as tools in the trade as secret agent spy, has been adopted as the femme fatale achetype in any number of pop culture mediums… from the thrillers of James Bond to the novels of Kurt Vonnegut to the b-movie erotica of Sylvia Kristel to the wartime sitcom of Hogan’s Heroes.  On “Mercury Dance,” the trio maintains a melancholy tone, even when the tempo rises, reflecting, perhaps, the real-life Mata Hari’s (aka Margaretha MacLeod’s) tragic early life and unfortunate end.

The snappy “Tell Me Your Number” is another James Bond reference… in this instance, Miss Moneypenny, M’s witty secretary, a character whose backstory has never been entirely fleshed out by Ian Fleming or his successors.  Sometimes Moneypenny is the flirtatious administrator, sometimes the former secret agent who burned out from the experience and just wanted to retire to a desk job.  For Wolter’s rendition, it appears he’s going with the former interpretation.

The album opens and closes with two piano solos.  The “002 1/2” from “The New Game” title is a reference to the secret code name Wolter adopts for the album, and the “Bascrobat & Taxi” referring to Matheeuwsen and van Cleef on album closer “The Old Game.”  Both are introspective pieces, and provide a nice austere counterbalance to the quickly changing tides of the album’s subjects and songs.

A neat concept and pulled off very nicely.  I recall when it hit the new releases listing back around the end of 2012.  I never got much of a chance to give it a serious listen, but something about it always struck me as something a notch above the rest.  Over time, I got around to spending more time with it, and now, several months later, I find myself returning to it with some frequency.  Easy to like, and plenty of faces to reveal.

Released on the Mons Records label.

Jazz from the Much, Germany scene.

The trio has set up a special promotional site specific to the CD that is centered around a game, in which the user is a secret agent and searches for clues and attempts to find the prize.  It’s a cute game, and it’s also a crafty idea, providing an example of the kind of things that jazz artists can do to attract attention to their recordings in a new internet era.