I listen to all of this: The Jakob Bro “Balladeering Trilogy” 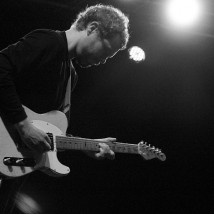 March 2015, Guitarist Jakob Bro has a new album coming out.  Titled Gefion, it features his strangely alluring mix of jazz and folk and ambient soundscapes.  And though it possesses the ingredients that typically complete your basic Nordic Jazz recording, Bro’s expressionism doesn’t fit so neatly into that general category.  Even when he’s being structurally obtuse, his music possesses a form and presence and melodic incisiveness that proves elusive to categorization.

In anticipation of his new album, I wanted to recap three of Bro’s excellent recordings.  In 2013, Bro wrapped up a planned trilogy of albums that began with 2009’s Balladeering, continued with 2011’s Time and ended with 2013’s December Song.  The music was composed for a small group of select musicians.  The albums each have their own personality, but definitely all sound as if they were formed from the same creative point of view.  This is peaceful music that presents itself with a simple, striking beauty that is often quite breathtaking. 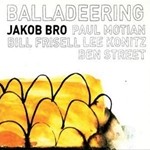 The 2009 release Balladeering started off the album trilogy.  Of the three recordings, it’s the one that most reflects the influence that Bill Frisell has had over modern guitarists.  His mix of jazz, folk and rock presented with a strikingly melodic, hazily ambient presence and sometimes ominous tone is stamped indelibly on this recording.  And while Jakob Bro is certainly his own man when it comes to a singular creative voice, if it can be said he came out of one particular “school of Jazz,” it would the Frisellian.

“Weightless” speaks directly to this distinction.  With its layers of melody and effects, it creates a swirling mist of sound whose form is defined by the path it drifts in as much as it is by its sequencing of one gorgeous note after the next.  “Terrace Place” runs very similar to this, but Konitz’s sax cuts through the fog like a knife.

“Vraa” sparks with life.  Konitz’s sax is thick with emotion, heart wide as the day is long.  Paul Motion’s drums match Konitz’s forward motion while kicking up a bit of propulsion.  On “Evening Song,” the melody serves as the source of propulsion, with lyricism as the fuel.

Aside from the lovely tone they provide, the use of steel-stringed guitar on “Starting Point (Acoustic)” portends an essential element that leads to the success of Balladeering‘s follow-up… Time.  But for this session, it’s all about the warmth those guitars generate, and how a distant beauty grows much closer and embraceable.

Of the three albums in Bro’s trilogy, 2011’s Time is most cohesive and radiates the strongest presence.  As a result, its seaside ease conjures up the imagery of the shoreline and salt in the air, and translates the immensity and vastness of a large body of water without sacrificing the music’s calm serenity.

On “Sma Dyrr,” steel-string guitar glitters like sunlight.  Thomas Morgan’s bass is bright and resonant.  On “Swimmer,” guitar lines plume upward from the dancing flame of Lee Konitz’s sax.  The expression on “Cirkler” is one of determined will, but it grows increasingly drowsy, as if having spent all its energy before drifting off to sleep.  The Frisellian influence is stronger on “Fiordlands” and “Nat.”  On the former, the rhythmic touch by guitars and bass is almost hypnotic, while the latter track’s shimmery guitars incite an ethereal presence that drifts peacefully along, even as melodic fragments create an ominous tone that hangs in the air.  The quartet gets a lot of mileage out of the mix of earthy and mysterious tones on Time, and it’s a big reason for the album’s success. 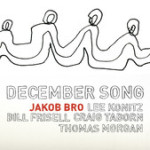 The final album of the trilogy was 2013’s December Song.  Overall, it possesses an ethereal presence wispier than that of its trio-mates and a formlessness that creates an undercurrent of tension, as if the ear recognizes that a tune can change direction at any one moment without warning.

Tracks like the enchanting “Giant,” on which Bro’s & Frisell’s guitar lines ascend upward like fireflies on a dark Summer night and “Laxness,” in which Lee Konitz’s sax bobs on the twin guitars’ peaceful ocean waves.  The solemn “Vinterhymne” wavers and shifts in and out of focus.  Konitz’s bright melodic light shades the song from one side while bassist Thomas Morgan works subtly, yet still resonantly from the opposite.

The album tracks that coalesce into a substantive form tend to feature Craig Taborn’s piano in a prominent role.  The brightly shining “Zygaena” sees Taborn’s piano walking out ahead with both guitars nearby at its side.  Together, they create a melodic cohesiveness enjoined with beautiful harmonies.  “Treehouse” takes a similar approach, but is expressed with serenity and patience.  “Kong Oscar,” on the other hand, has a bigger presence via a series of strong melodic surges.

But overall, it’s a track like “Risskov” that reflects the spirit of the album… an ambient languor struck through with lively melodic flares and enveloped by drifting harmonies and an ethereal presence.

Jazz from the Copenhagen scene.

| Direct from the artist