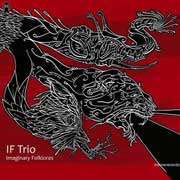 The If Trio does not provide a map.  You are expected to follow along, with little advance notice given on a song’s destination or the path it will take to get there.  The ingredients of chamber music and jazz come through clearly on Imaginary Folklores, but it’s the mix of folk musics represented primarily by the French, Finnish, and Argentinean origins of the trio members that strikes the lasting impression.

The melodies behave less as statements of intent as they do seeds for growth and improvisation.  Within moments, the opening stanza of “Dans le Decor” is out the door and gone without a trace, sending only a brief postcard near the song’s end as a reminder of its existence, and “Stratometriques” is only a shadow of its former self by the time the song reaches its conclusion.

Tempos are about motion, not timekeeping, of shifts from the frenetically churning of rhythms into gentle swooning passages with a predisposition to take off and soar.  The burst of hyperactivity from “Nijdgu,” with its variable motion and slippery melody contrast nicely with the ambling cadence and rustic charm of “La Bataille.”

The flute of Florian Guibert darts about furtively, then breaks suddenly into a soothing melodic drift.  “Capricorne” is a tango caught in a wind gust, and Guibert matches the speedy drafts note for note, whereas on the moody “Sirius B,” he orbit the melody with a simple ease.

The cello of Mauro Sarachian broods and growls, but no matter how ornery it becomes, the instrument’s resonant beauty eclipses its darker tones with brightly lit displays of elegance.  When out front, as on “Dans le Decor,” its sonic fullness has the presence of a roar, whereas on “Ombras,” it swells with intensity, then recoils back to a state of melodic grace.

On guitar, Otso Lähdeoja personifies the album’s mannerisms, those cues that put everything else in the proper context… the chatty accompaniment on “Stratometriques” casts in a cheerful light what might otherwise be viewed as a gloomy tune, and his indie-folk approach on “Sirius B” provides an ear-to-the-soil circumspection to the song’s modern classical leanings.

An enchanting album that grows more beguiling the more one spends time listening.

Recommended: Masaa – “Afkar” My new eMusic Jazz Picks are up at Wondering Sound