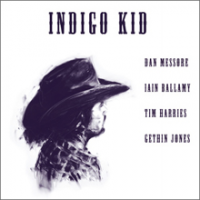 Every time I hear the first notes from Indigo Kid’s self-titled album, I want to get in the car and go driving, and I want it to be raining as I drive past city streets and out into the countryside.

Two feet in the modern jazz world, this is an album that unabashedly utilizes melodic excursions and rock rhythms to get its point across.  The meandering route the album’s tunes take to traverse the path from first note to last give a storybook feel to many tunes.  The album is laid back, moments of ambient reveries broken by relaxed conversation, on a calm and reclusive day.

Dan Messore’s guitar approach falls squarely in the Kurt Rosenwinkel camp (for those unfamiliar with Rosenwinkel, please see the first sentence of paragraph two of this review to see how he’s made his mark in Jazz).  Messore creates an introverted dynamic, but one where the listener is invited into the guitarist’s head… rendering the connection no so much one of solitary absorption as just an unconventional invitation to visit.

Iain Bellamy is on sax, he of Loose Tubes fame, and currently a member of Food, an ambient jazz group that out-ECM’d ECM before eventually being signed to same label.  Bellamy brings a serenity to most music he’s involved with, but here his contribution gives more a sense of searching outward, his notes asking questions and postulating theories on what’s been learned.  If Messore’s guitar is the falling rain, then Bellamy’s sax is distant lightning… quiet, but with a presence impossible to ignore.

If you’ve fallen asleep near a gurgling stream, then you have a decent idea of what bassist Tim Harries’ contribution to the album is.  It’s a series of blips and drips, pops and whirls, and though there appears to be no pattern to it, all the notes just seem to make sense when they hit.  Harries’ bass isn’t an accompanying instrument as much as it is a prominent part of the landscape.

Gethin Jones is my kind of drummer.  The rhythms aren’t laid down, but stitched together into sheets of percussion that get spread out over lengths of the song.  It has an immersive effect, which when combined with his unobtrusive style, blends seamlessly with the rest of the quartet.

The album compares favorably to Brian Blade‘s Perceptual (an album which, not coincidentally I’m sure, featured guitarist Kurt Rosenwinkel).  Though it lacks textures of Perceptual‘s varied instruments, the overall mysteriously ambient tone make them a reasonable match.

Indigo Kid is an album that has really grown on me.  I recall the first time I heard it, and how even as the album progressed my opinion of it changed from a first impression of ordinary music to something far more impressive.  Now, I’m pretty much addicted to.  I fear what will happening to my listening habits as Autumn falls over the countryside and the gloomy loveliness of Fall in the Countryside is my view as I listen to this album.

Released on the Babel Label.

You can stream the entire album, and purchase it, on the artist’s Bandcamp page.