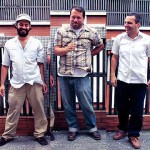 If you’re in or around Louisville, KY today, you’ll want to catch the São Paulo Underground at Dreamland.  This Sept. 20, 2015 show starts at 8pm.  It’s likely to be one of the best shows you’ll see all year.

The SPU are a trio of Rob Mazurek, Mauricio Takara and Guilherme Granado performing an updated version of 1960s Brazilian Tropicalia music, blended with modern post-rock and modern jazz dynamics, and boosted with a mad scientist mix of laptops, effects, looping, and electronica.  Mazurek will primarily be blasting away with raw power on cornet, Takara will be adding the guitar-like rhythmic action of the Brazilian cavaquinho and the enthralling melodicism of the rabeca (basically, a Brazilian fiddle), and Granado will be running down the grooves and boosting the effects on his various keyboards and armory of electronic effects.

This is dance hall music for the mosh pit crowd.  It’s frenetic music with a thrilling groove… music with which to bounce off the walls of a tiny space.  It’s celebratory music that isn’t afraid to fight for its joy.  And most important, this is fun music that translates to a fun time at a live show.

You want to know what you’ll be getting?  Hit the play button below and let the musicians tell you…

The show is being held at Dreamland, which is located in Louisville’s NULU neighborhood.  Tickets are twenty bucks.  Doors open at 7:30pm, music starts at 8:00.

Dreamland is located at 810 East Market Street. Here’s A LINK to a google maps page for directions.

Recommended: Carlos Falanga – “Gran Coral” Recommended: João Lencastre’s Communion – “What Is This All About?”