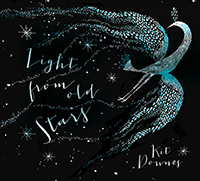 There’s no mistaking pianist Kit Downes.  Though he collaborates with a pretty disparate group of fellow musicians on the UK Jazz scene, his distinctive sound comes through every time.  This is true when it’s his own compositions or those of another.  His sound on piano possesses an austere beauty, a quality that remains constant whether the song performed is a tightly structured sculpture or an expression of shattered glass.

In recent years, Downes has recorded with the genre-defying Threads Orchestra, the straight-ahead ensemble lead by George Crowley, the eerie avant-garde Golden Age of Steam ensemble, the rock-jazz fusion outfit Troyka, the post-bop Neon Quartet, and, of course, albums with his own name in the large print, like the excellent Quiet Tiger, which brings back most of the same personnel and sticks to a similar make and model.

His 2013 release Light From Old Stars stakes out its own path, diverging from that of past recordings.  And yet, despite that, eclipsing new paths are familiar sounds, reminiscent of music from before but molded of something new.  This is what happens when a musician finds their voice and goes about the hard work of developing it.

The songs of Light From Old Stars either race about with a crazed kinetic energy or calmly drift in a state of rest.  At both speeds, the blues are an evident source of fuel.

Some tracks expound on the power of repetition at high speeds.  Album opener “Wander and Collossus” is a series of tiny folds repeated with slight permutations, like an origami construction perpetually taking on new, but similar shapes.  “What’s the Rumpus” hits the ground running, notes kicked up like dust as they scamper forward.  And the solo piano interlude of “Falling Dancing,” which darts about like gnats on a hot day, leads into the rollicking “Owls,” a boiling cauldron of activity that switches between avant-garde attitude on cello and a soulful blues on bass clarinet.

And then there are those album tracks that adopt a more casual gait, yet interject flurries of blues notes like a hit-and-run heartbreak.  “Bleydays” is a tipsy kind of blues, more soul than strategy, and harkens back to the free jazz flirtations of Keith Jarrett’s American Quartet of the 70s.  “Outlawed” also comes out nice and casual, but eventually builds up to an exuberance that the song’s peaceable origins can’t contain.

But a few tracks look upon motion as something to be approached with a serene demeanor.  “Jan Johansson” has a lovely melody that drifts like mist over a calm stream of rhythm, and “The Mad Wren” begins with an inviting tranquility, which echoes through the song’s entirety, even as it gradually ramps up the tempo.  Then there’s “Two Ones,” which opens with cello whipping frenzied about before the rest of the quintet steps in and shepherds the tune in a more controlled direction and a calmer tone.

And Kit Downes’ sound is stamped into each tune.

Released on the Basho Records label.

Something Different: Julia Kent – “Character” My new Jazz Picks are up at eMusic