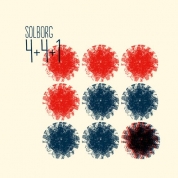 A strangely compelling album by guitarist Mark Solborg.  At first blush, it sounds like large ensemble avant-garde… the clash of thunder, streaks of dissonance, honking and squealing.  And those elements are there, except it’s so much more than that.  Solborg weaves in sweet melodic lines, subtly at first, but becoming insidious and unmistakable for the thrashing beauty that they are.  Want an example?  Check out opening track “Mrs. Pedersen Takes the Tram.”  And then there are tunes like “2620,” of gently nudging serenity, of monstrous notes spoken in a soft voice and with good intentions.  It’s an album of contrasts and incongruities which all fit together with a surprising tunefulness and dynamic interaction.

If one were to take a cross-section of this album, there would be visible strata of avant-garde music, of free improv jazz, of post-bop and some drone.  In this, the album isn’t original; it’s in the way that those strata converge and separate and converge yet again that make this album so special.  The interplay between the artists, coming from different places and merging together in a way that creates new exciting sounds, it makes for an album that finds new ways to delight and surprise.

“Almost” is a drunken stagger, with horn burps, woodwind moans, and guitar twittering absently to itself.  The tune has a steadily growing intensity, and what began as a drone builds up to a satisfying roar.

“The Whispers” begins with sheepish blips and gurgles, but the instruments gradually forget to use their inside-voices, the volume increases, tempo builds, and then, suddenly, it just drops off into silence.  When the voices start again, it’s back to church mouse status, except that the ambiguous sounds have a coherency lacking at the start of the tune, a passage of smoldering airiness, like a plume of smoke drifting up from a small campfire.

The album ends with the punchy “Open Parenthesis (With Bob).”  Lines aren’t competing with one another so much as perpetually finishing one another’s sentences.  There is a brief eye of the storm for an alto sax solo, but this quickly cedes way to a torrent of tangled improvisation, one that ends as a concentrated mass surging inexorably onward to the album’s final note.

And when it gets there, it would be an understandable impulse to hit the play button and start it again from the top.  I’m pretty taken by this recording.

Originally performed at the 2010 Copenhagen Jazz Festival, where the album was recorded.

Released on the ILK Music label.

Jazz from the Copenhagen, Denmark scene.