Marquis Hill – “Sounds Of the City” 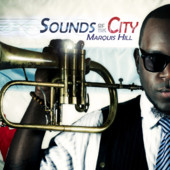 In Jazz, you start talking about catchy tunes with plenty of hooks, it can almost insinuate a derogatory judgment.  In an art form that bases itself, in part, on the technical skill of the musicians and their expertise in handling both compositions and interplay, it’s almost a backhanded compliment to say that it’s the kind of song one can hum along to.

But the thing of it is, part of what is best about Jazz when it’s at its best is that simplicity and complexity can co-exist within the same tune, and have a common bond in the perfectly constructed melody.  The same can be said about tempos that adds wrinkles to the standard rhythm patterns while still inducing the feet of listeners to tap along.  The hint of simplicity during a flirtation with complexity… that’s an album I like to sink my teeth into.

This is a good time to bring up Sounds Of the City, the newest release by horn man Marquis Hill.

Hill’s 2011 release New Gospel was one of those albums I just never had the time to give a write-up to on this site.  I got the ball rolling on Bird is the Worm in early December 2011, and tried like hell to give some synopsis overviews of the 2011 releases I liked best.  There was only so much time, and several deserving albums went without mention.  New Gospel was one of them.  It was a solid album that embraced the spirit of the Hard Bop 1960s, when jazz infused with funk was an enhancement of a groove that didn’t interfere with the swing.  For a debut album, it was an impressive recording, full of life and possessing ideas of a refined focus.

Hill’s sophomore release Sounds Of the City has him more comfortable as session leader.  Here, he stretches out, obviously confident in his ability to display a wide array of facets to his music, as well as his ability to tie them all in together.

The melody of opening track “Abracadabra” draws the ear right in.  That simple piano riff, with horn accompaniment, it’s a terrifically infectious invitation to keep listening.  Hill then keeps adding textures to the track with short sections for each instrument that add both fire to the song and freedom from the melody.  And when the tune restates that melody, it’s love all over again.  He ends with the restatement of melody, toying slightly with the tempo, giving the melody a couple unexpected inflections, a brief glance at other melodic possibilities before the end.  It’s and example of the kind of balancing act between simple and complex that appears throughout this album.

Some other notable moments throughout the album…

“Inner City Blues” has a lovely groove.  Charlie Kirchen’s walking bass lines absolutely shine, with guest Bobby Broom’s guitar a star in its own right adding his own particular brand of friendly fire. (P.S. This isn’t a Marvin Gaye cover)

“The Rose” with a persistent rhythmic attack partnership between piano, drums, and bass, thick and intrepid, while horn and sax play light and spry over the top.

Tracks like “She Loves Me, She Loves Me Not” have Milton Suggs singing velvety words to a trad jazz ballad, while others tracks are interludes of Suggs riffing some spoken word

Track “Sounds of the City” is quintessential Chicago.  Starts out with a cool tempo stroll, shifts right into overdrive like rush hour traffic all around and CTA trains burrowing through the subway down below… then suddenly a peaceful piano solo like boats rocking on the waves of Lake Michigan.  The rest of the group joins in, and now it’s a brisk rhythm, cool languid notes, and the nightlife of the city settles in for the evening.

“The Token,” which weaves a little bossa into the mix, and slips nicely into the light bounce of “Like Lee.”  And “North Star” is hard bop of the sixties, a track that wouldn’t have sounded out of place on McCoy Tyner’s The Real Mccoy.  It’s an uptempo piece that lets McBride offer a blistering solo.

The album ends with the one cover, Benny Golson’s “Stablemates.”  Before that, it’s “Kiss and Tell” which has a soulful groove and an R&B lightness that gives a sense of a lullaby.  Those last two tracks, though seemingly a bit out of place in the scheme of the album, they do accurately portray Hill’s inarguable comfort with co-existing in both the music of the past and present, and imbuing it with his own, developing, sound.

This is just a very solid album.  With Sounds of the City, Hill has put out two notable albums in the last two years.  I’m already looking forward to his next recording.

Released on the Skiptone Music label.

Jazz from the Chicago scene.

Currently not available at eMusic.  I’ll update this page if it does become available.  You can keep checking back here to this review from time to time or just stay current reading my site, because this album will definitely be one of my Jazz Picks if it shows up on eMusic, so you’ll know it has become available on eMusic when I make the relevant weekly announcement about my current round of Picks.