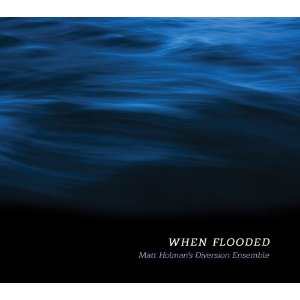 An atmospheric release from trumpeter Matt Holman, on his debut recording When Flooded.  And this is meant in the sense of formlessness, not airiness or a deficit of substance, as the word is more typically used these days in reviews.  The structure of this music reveals itself at well-placed moments, allowing the notes to flow freely, seemingly without direction.  The music doesn’t sound composed so much as it does shepherded.  It’s why the album’s beauty isn’t a consequence of some outward bloom or the sudden leap to a lofty plateau, but, instead, attained as a result of a confluence of its varied parts coming together as one, achieving a unison of sound that is lovely in that moment and that moment alone… a moment that could disperse suddenly and without warning, perhaps never to return.  A fleeting beauty.

The emotional charge is one of measured dispersal.

The opening two tracks, “Kindred Spirits” and “Tutti” open with lovely drifting harmonies, and gradually build strength.  Holman’s trumpet often takes a path that has it soaring mere feet over the pocked landscape developed by Ravitz and Radley on drums and guitar.  McGinnis’s clarinet is the perfect complementary fit for Hoffman’s cello on “Tutti,” together providing both the moonlight and the darkness, a mix of warmth and melancholy.

Whereas the title-track “When Flooded” does lift its voice up with force at intervals, it’s “Chain of Command” that serves as the first notable deviation from the established calm pace and tone.  It’s got a punchy cadence, grinds through a melody that sees instruments noisily entwined.

But most tracks are not so easily described or corralled.  “Tandem” is a bubbling cauldron of sound, with Hoffman’s cello a real highlight, first as accompaniment, but then as it asserts its presence in a lead role.  And “Earworm” spreads across the surface unevenly.  A dour expression of melody, followed by expansions that seem unconcerned about being associated with their original expression.  And “Between” starts out more upbeat, though expressed in a restrained tone.  Drums are atwitter.  Trumpet has a little bounce to it.  Some moments of drowsy languor, others of bursting energy.

The album ends on a note not unlike how it began.  On “Where the Tracks End,” McGinnis’s clarinet establishes a brooding tone atop Ravitz’s soulful percussion.  When Holman moves in on trumpet, he simply becomes part of the existing flow of sound, followed in the same way when Hoffman joins on cello.  “Syndrome” sees the album to its end, beginning with a gorgeous duo between cello and clarinet.  Trumpet adds an additional layer of heartbreak, before both drums and guitar add a brief surge before the song drifts away, disappearing, as if it were never truly there.

Available to stream and purchase at the artist’s bandcamp page.

Recommended: Anne Paceo – “Yokai” My new Jazz Picks are up at eMusic