Matt Ulery – “By A Little Light” 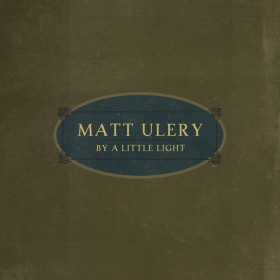 It’s a celebratory moment when an artist attempts to grasp a grand vision.  We should want that from our artists, that they attempt to synthesize Big Dreams down to expressions of creativity that can be shared with us all.  We want to be able to experience the great expanse of a massive idea and gain a sense of the journey it took to get there.  The connection with something that is both immense and intangible is like staring into futures and possibilities opened up to us all.  These attempts at capturing the epic don’t have to be perfect.  Hell, sometimes their imperfections add to their strength, much how a brief slip can make the climb to the mountaintop that much more thrilling and glorious.

Matt Ulery’s By A Little Light is about as close to perfection as one can get.

Spanning two discs, bassist and composer Ulery presents a story that is as much classical as it is jazz, as much theater as it is music.  At the heart of the music is the piano trio.  Working with two different piano-drummer combos, pianist Rob Clearfield paired with drummer Michael Caskey and pianist Ben Lewis paired with drummer Jon Deitemyer, Ulery starts with the trio and builds up, and out, from there.  Adding members of the Eighth Blackbird ensemble, violinist Zach Brock and vocalist Grazyna Auguscik to this mix, Ulery all but guarantees that his music will defy comparison.  This is music with a strong identity difficult to put name to.  The first disc, subtitled “By a Little Light” is all instrumental.  The second disc, subtitled “To the Brim”, is accompanied by vocals.  It is an album in two acts.

Disc One sets the stage.  Using a blend of classical, jazz, and Old World folk music, Ulery weaves a landscape out of sound and populates it with cities of notes.  Even on a tune like the title-track, where it is only the piano trio in action, the texture of the sound gives the impression of more instruments lurking in the background, uncredited and out of sight.  Nothing about this music is small.  Even the nuances possess a weight that belies their brief moments in the spotlight.  Piano is given lots of room to roam and explore, while drums stamp it on the map.  When not gingerly tiptoeing through the scene, strings make dreamy pronouncements, while vibes and trumpet shade the edges.

No better representative track for Disc One than “To Lose Your Mind.”  Vibes and piano provide a sense of gravity, of two feet planted on the earth, while strings and drums provide the running start and liftoff to flight.  On violin, Zach Brock transitions between those two roles, providing at time the sound of footfalls on fresh soil, and at other times, lush notes ethereal as clouds.

The final track on Disc One, “The Miniaturist”, ends with a lullaby, reminiscent of Ulery’s 2010 release Flora.Fauna.Fervor.  Piano and vibes meticulously create a silhouette composed of infinite permutations of shading, while bass and drums imbue it with just the faintest sense of motion, that perhaps the silhouette, like a dream come alive, is more than just a shadowy outline.

Disc Two lets the characters develop.  Set to a backdrop of soaring woodwinds, brass, and strings, Auguscik sings words of encouragement.  The song blossoms with the hope and romance of fairy tales.  But fairy tales are also typified by the affliction of dark days, and so when shadows descend upon the composition as it transitions to the next song, it’s almost to be expected.  This time it’s Ulery who takes over the role of vocalist.  His voice has little range, and it’s sort of brittle; qualities which imbue the music with an eye-opening vulnerability as he sings of his worry of loneliness and worst case scenarios.  It makes for one of the album’s biggest successes.  After this, the composition returns to the jazz piano trio, and then true to form, it grows organically from there.  Joined by strings, alto flute, and bass clarinet, the tune lifts off, returning to its original spot for the song’s conclusion.

Auguscik returns to vocals for the final three tracks (with Ulery providing some accompaniment).  They’re beautiful songs, and of particular note is the superb pairing of Tim Munro on alto flute with the bass clarinet of Michael Maccaferri on “To the Brim”, who enter with melodic statements of heartbreaking beauty.  Their appearances are only momentary, but it speaks well to Ulery’s talents that he allows his compositions room to breathe such that seemingly minor details and embellishments are allowed to become something greater.

“… allowed to become something greater.”  That is By A Little Light in a nutshell.

Music from the Chicago scene.

You can purchase the album as MP3, FLAC, or CD at the Greenleaf Music store.