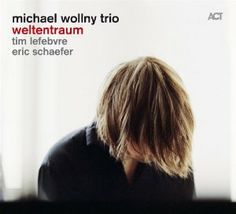 There is a charming quality to the creative fearlessness that pianist Michael Wollny displays in his projects.  His trio [em] was all modern piano trio, but along with the unrepentant flair for drama were Wollny’s quirky compositions that tinkered with cadence and melody in ways that seemed counterintuitive to the evocative aims typical to that particular brand of jazz-rock fusion.  Wunderkind, his duo collaboration with Tamar Halperin, built around keyboard instruments, with harpsichord as the centerpiece, isn’t the kind of project that is going to lead to a musician getting pigeonholed as anything ordinary.

This holds true, also, for his odd Thrillbox collaboration with accordionist Vincent Pierani and bassist Michel Benita, an album with a folksy charm and a warm heart and a vocabulary sufficiently expansive as to deftly rope a fascinating rendition of Thelonious Monk’s “I Mean You” into its embrace.  And then there were numerous renditions of Miles Davis and Duke Ellington compositions on his collaboration with saxophonist Heinz Sauer (If [Blue] Then [Blue]), a collaboration that has led to recordings that possess an austerity reminiscent of Nordic Jazz and the elegance of Classical.

Weltentraum, the newest by Wollny, displays more of that creative bravery, as he switches things up by building a new trio and adding a new sound to his already diverse repertoire.

In some ways, Wollny’s newest project is his most straight-forward.  This type of melodic impressionism is not a new thing, may actually symbolize the development of the jazz piano trio in the modern era, but Wollny’s current foray into the medium is nothing short of spectacular.  And since we don’t listen to sub-genres, but instead to the artists that express the common forms of music language, any time a talented musician picks up a particular line of dialog, it’s always reason to sit up and take notice.

It’s not uncommon for Wollny to embrace the music of others and channel it through his particular creative lens.  Weltentraum is no different in this regard.

The trio’s rendition of the Medieval court music of Mauchaut’s “Lasse!” retains a hint of formal dance, yet instills a nonchalance in the melodic expression that is a toothsome contrast.  And “Nacht,” an Alban Berg composition of function and fancy, is contorted into a little ramshackle tune that vacillates between a state of coalescence and one of carefree dispersion.

But it’s not all music of ages past.  Wollny’s trio brings a clearer definition to the shimmering harmonic wave that is the Flaming Lips “Be Free, a Way.”  A thick melodic line lights the path ahead, as patient expressions paint in evocative tones.  And a song that starts out with a moody disposition asserts its presence, growing increasingly dramatic as Wollny expands on the opening melody and Schaefer’s drums become more vociferous, and the song becomes something quite different from the original while still shadowing Wayne Coyne’s spark of inspiration.  And then there’s their rendition of pop artist Pink’s song “God is a DJ.”  Featuring the vocals of guest Theo Bleckmann, and also featuring Wollny’s sole appearance on harpsichord on this recording, they bring a Zen disposition and a droning ambiance to the original’s party-time atmosphere, and give a sincere take on a song for which it would be too easy to adopt a snarky attitude.

But Jazz is typified by honest takes on pop music of the day, going as far back as the genre’s birth with renditions of the Great American Songbook, through free jazz takes on songs like “My Favorite Things” and “Greensleeves,” of fusion and post-bop takes on the entire Beatles songbook, and now with renditions of the music of modern acts like Radiohead, Elliot Smith, and The Flaming Lips.

Intriguingly, but not surprising, Wollny hits upon a couple songs that fall far outside the mainstream.  The trio captures the inherent sadness in the Charlie Kaufman-Jon Brion tune “Little Person” by working a melodic seam as a gentle lullaby, and then allowing the song to drift from first note to last.  And Wollny breathes some Sunday church gospel into the fuzzily ambient selection from the David Lynch Eraserhead soundtrack, “In Heaven,” diverging from the original’s pop music tone with a different kind of soul.

Only a few of the album’s track are Wollny originals.  One of those is arguably the strongest of the bunch.  “When the Sleeper Wakes” has bassist Lefebvre setting the pace for a groove with all kinds of serious bounce.  Schaeffer flits between aiding that groove and joining Wollny’s series of improvisatory somersaults executed in the seams between the rhythm section’s landmarks.

Another Wollny original, “Engel,” is a slow build of melody, a rising tide that reaches its crest patiently, but with an increasing intensity that subsumes its tenacious demeanor.  Similarly, “Hochrot” glitters like stars with a harmonic brilliance that’s quite stunning, even though it never raises its voice to startle.  And then there’s “Muhlrad,” which comes in flurries, stays light on its feet… the playful dance of a flickering candle.

The entire album is enchanting in that way.  An unassuming beauty that resonates brightly.

Jazz from the Berlin scene.

I’ll add a link for eMusic when it becomes available.

Kullhammar, Zetterberg & Holgersson – “A Love Supreme” My new Jazz Picks are up at eMusic