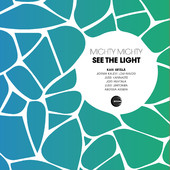 Half 1960s Hard Bop heat, half 1970s electro-fusion groove, the Mighty Mighty sextet offer up two halves of goodness with their new release See the Light.  Led by pianist Kari Setälä, the sextet conjures up something of a period piece, opening the album with a set of Hard Bop tunes straight outta the sixties, with swinging tracks like “Backyard Boogie” and title-track “See the Light,” heavy with soul and the compulsion to move move move.  “Once Again” slows things down and adds a hint of Latin rhythms, whereas “Dark Sun” hints at the transition period from the bop era to when spiritual jazz got its hooks into the scene.

The next handful of tracks move into the subsequent decade, when fusion molded a new kind of groove for Jazz, melodies took on a shiny veneer, and keyboards were jacked into the nearest outlet.  “Simba” with its thick funk groove and “Seventh Sign.” with a groove more like sunlight.  “Karma” with its infectious rhythm and sunny attitude, electric keys popping brightly off the surface of the melody.

The album brings the two halves together for the final two tracks.  “Too High” and “Time’s Up” announce themselves with a hard bop presence, but sneak in conversational asides more fluent in the fusion language.  It’s a nifty way for the sextet to incorporate each of their inspirations without muddying the waters of either.

An album with a real buoyant personality, and all kinds of genial warmth.

Jazz from the Helsinki, Finland scene.